Do proZtitutes make translation easier than ever?

It's surprising how some are surprised when certain online language service auction portalZ hit new lowZ all the time. The latest controversy arose when a German colleague clicked an advertising link (ka-ching for the King, more ad revenue) which displayed something like the following: 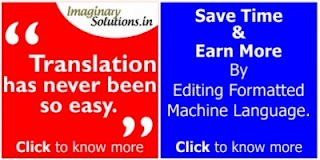 This took him to the site of a service provider in India offering to convert and machine translate a variety of file types, creating formatted output, and doing OCR conversion for what some might assume were "reasonable" prices. To convert and machine translate about three scanned pages of double-spaced, typed text (about 1000 words) costs a mere USD 7. Ramalamadingdong, what a deal. Let's forget for a moment that OCR is often a no-brainer job with professional or even second-tier OCR software, and Google Translate and other garbage engines are free or nearly so, and let's not even think about potential issues of confidentiality that too many forget to consider. And then, of course, one can ignore the fact that it sometimes helps to understand the language of the text you are converting if there are decisions to be made about blocks and sequences or corrections to deal with.

The German colleague, who runs a small agency, commented that at the rates quoted, he would have done nicely with the 1.2 million words he converted last night. But he was more worried about other things: 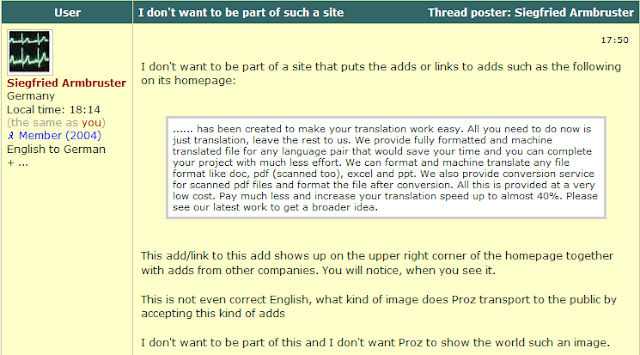 I'm not sure I understand the concern with Ze Zite's reputation; in many eyes it has been disreputable for some time now. That ProZ is now advertising services for low-end garbage services like this is hardly much of an insult on top of the record of its past injuries. This is also entirely consistent with phoax at the commercial portal "certifying" bottomscraper agencies and other amusing stunts.

I don't think he has to worry much about Ze Zite trashing his reputation by association. I'm sure, like any good businessperson, he has developed a number of better channels for acquisition and collaboration and prefers to work with professionals.

Some time ago, I wrote about discussions of a "translator's dream site". I had intended to follow this up with a review of various alternatives I have seen develop in recent years. I don't believe that there is one ideal "site" for all needs. Where you troll for quickie assignments might not be where you feel like a serious technical discussion about your CAT tools, and I hope it's not where you would discuss truly sensitive business matters.

Abandoning the illusion that a for-profit portal with a history of exploitation and pandering to interests at odds with those of freelance translators and other small service providers is a good first step.

After that I would look for the right mix of public and private platforms, both virtual and in the real world: local or national translators associations, Yahoogroups and other online list servers, local business associations or organizations associated with your major areas of interest, regular conferences and trade fairs, private online forums - whatever works best for you as you like to work and interact with clients and peers. I won't presume to say how to go about this, as we each have our own unique strengths, and my way might not work well for you. Some days it doesn't even work for me ;-)

I've found that my personal mix of networking at professional conferences and trade fairs of interest to me, Twitter, Facebook groups like Networking Translators (where a lot of German peers seem to congregate in a chaotic cluster), the forum for BDÜ members and the private forum Stridonium give me a richer, more diverse professional experience than one typically enjoys with PrAdZ.

If you want to support a Zite willing to proZtitute itself with any and all promiscuous promoters of Gargled Translation (however well formatted), be my guest. You are free to choose your market segment within the limits of your abilities. But should you opt for the compelling deal from "Imaginary Solutions" to machine translate your texts, I'm sure your competitors will have kind words for you.
Posted by Kevin Lossner at 8:10 PM