Who's afraid of the BDÜ?


A recent publicity stunt by the German Association of Translators and Interpreters (BDÜ) has provoked some interesting responses, most of which, I think, reveal the personal agendas and prejudices of the respondents and miss the point entirely. In a brilliant bit of political theater, financial translation wizard Ralf Lemster was pitted against The Machine loved and feared by many: Google Translate.

Well-known MT pundits like Kirti Vashee know this isn't "fair" and uttered the expected objections and protests. I imagine the details of their criticisms are correct, or largely so. But they are also largely irrelevant. They are all too aware of the Imperial Elephant in the room: public perceptions and how too many private individuals, corporations and - to their great shame - language service brokers apply machine translation in ways that are entirely inappropriate.

All the talk of controlled language, fit-for-purpose, quality-is-what-the buyer-thinks-it-is and "it's here to stay, so deal with it" and all the other noise generated by MT's sycophant choir reminds me a bit of the old carnival shell game, except that the ones taking your money there are a bit more honest in their game than ones who tell you now to "get on the MT boat or drown". 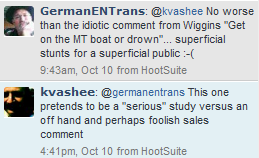 Off-hand comment? Bollocks. It was a prepared keynote speech at memoQfest 2012 and carefully calibrated to play on the fears, uncertainties and doubts of listeners and drive them down the drain of the post-editing sewage cycle. It is a far cry from the restrained, responsible approach to machine translation promoted by technologists I know who understand the extremely limited scope of MT and never oversell its performance or potential (at least not within my hearing).

The MT carnies know instinctively why the ludicrous BDÜ "case study" is brilliant. It is short of fact and science and follows a familiar lightweight format we all know from modern "news" reporting. And however much better custom, optimized MT engines are said to be, it is Google Translate more than any other which casts the biggest shadow across the translation landscape.

I remember a few years ago how Kilgray once objected on ethical principle to officially supporting a Google Translate plug-in for memoQ, because of the very real violations of confidentiality and often law which occur when translators send their clients' content to Google for processing. This promiscuity with the intellectual property and privacy rights of others is not excused by the frequency of its practice any more than the widespread practice of unsafe sex in countries devastated by  double-digit AIDS infection rates makes the risk of illicit mingling any less.

But SDL, long an ethical "innovator" in the world of translation (remember how the Trados gang brought you the Big Lie of how translators prefer to give fuzzy discounts - long before most translators had CAT tools or even knew what a fuzzy match was), apparently had no such reservations and made the tools to facilitate breaches of confidentiality more accessible to translators and wannabes, so Kilgray as well as many others gave in to popular demand and indifference to the law and released its own Google Translate plug-in officially. (Of course I support the right of SDL, Kilgray, Atril and any other company to make such tools freely available. A Google Translate plug-in no more violates intellectual property rights than guns kill people. We all know and accept that it is humans and their weak nature which are at fault, and we can do nothing about that but let things take their course, right?)

Reactions from translators who understand German were fascinating. Some pointed out that the New York Times had already "gone there" (not really - the translations of literature snippets are even less relevant I think... I want to see real-life risks shown with electrical repair instructions and instructions for surgery or the use of pharmaceuticals), others criticized the BDÜ for not showing side-by-side comparisons of the machine's erroneous spew and Ralf's correct text. But I think the Devil's distraction is in the details.

The BDÜ is generally rather hidebound and out of touch with many aspects of modern translation practice; the pages of nonsense in the online registration for their recent conference in Berlin tried my patience to the point where I decided to stay home and make jam for the second time. But this time they got it all right I think.

A good guerrilla knows that the battle is about hearts and minds, and since most of the public is a bit short in the latter capacity, it's best to go straight to the heart of the matter with an entertaining show. A week after watching the "report", few will remember the details. But they will remember the emotions evoked and the air of authority projected. MT will lose every battle of fact on the fields where its carnies pitch their tents and the public crowds gather, but the shysters have a very sure advantage and exploit it at every opportunity: the naive confidence of the scientifically illiterate that "progress" will continue and things will always get better, MT included. I hear this all the time from colleagues. The less they understand the technology they use, the more they are willing to be used by it, and the greater their confidence that it will inevitably infiltrate their necessary professional activities.

A similar confidence once existed for the impending discovery of the Philosopher's Stone to turn lead to gold, occupying even the greatest minds like Sir Isaac Newton. Skeptics like me were most likely laughingstocks to go against such wisdom.

The way to win this "war" is not with facts to be forgotten in a day. The path to the victory of good sense and the human spirit lies in a bit of theater like the BDÜ has offered and perhaps some good jokes like the late Miguel Llorens so generously shared at the expense of dishonest MT promotion.

That is something which the carnies have good reason to fear.
Posted by Kevin Lossner at 4:08 PM