We are the wind beneath their wings

I've been translating now for some 35 years, though the first two decades and a bit more I did so to support my personal interests and research rather than to pay my way. But I've had a close eye on many developments in the profession since my student days, when I dabbled in Russian to German translation and a bit of Sumerian, and later, when I was married to a sometime translator, I watched as technology began to have a greater impact on the profession. I can even plead guilty to having introduced modern computer-aided translation technology to an unsuspecting corporate translation department, which was dissolved about a year later as the company realized that outsourcing kept the translators on their toes and prevented some too-frequent abuses.

There are many advantages to having an in-house translation team. Those who are part of one or who have one in their organization can likely cite these better than I can. One of the greatest advantages I see is continuity: the translators and editors know the products and the people who create them and usually use terminology more appropriately and represent product characteristics more accurately. Let's not talk about the horrors of L2 translation (into one's second, third or fourth language) imposed by management that often does not understand linguistic competence and how best to use it in the corporate interest.

Some understand these matters, at least in principle, and rely on experts to guide and support them. For a very long time, translation agencies have been part of this network of experts. There are good ones and bad ones, and I have known very many good ones, and I continue to support some of these as a translator and consultant. But the raw truth is that most of the time, using a translation agency is a poor substitute for the relationship needed to sustain or even enhance one's foreign language communication. And many of my experiences in the past few years lead me to the conclusion that even the best agencies as they are now operated are not in their clients' best interests.

I think that Once Upon A Time the translation business was relatively straightforward and did not challenge the business skills of many translators and agency operators much. There were - and continue to be - great inefficiencies, but in the manure of that inefficiency a good amount of healthy expertise flourished and nourished those who called on our profession for assistance. Expectations were perhaps often lower (at least with regard to schedules) and I imagine they were often exceeded. Perhaps not; old hands can enlighten me. 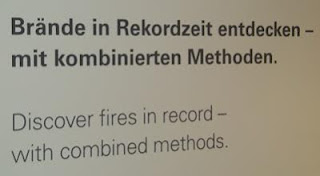 Now, however, one sees a commoditization of our "product" - expression in other languages and cultural contexts - and a widening gap between the linguistic "haves" and "have nots". Experienced agencies whose management has usually long since ceased to live from their personal labor of words have jettisoned in-house translation competence and rely on a juggled network of external language service providers (often referred to as freelancers) to do the work as young, inexperienced clerks shuffle schedules, quote projects by outdated and/or inaccurate means and off-load anything requiring technical competence to other "departments" or the external translators themselves.

It's a dirty secret that the pool of truly good translators and revisers is very limited in many specialties, even in the most common language pairs. Or at least the pool from which dozens or hundreds or even thousands of agencies draw is very small. Many of us have been asked to revise our own work by an agency which was not contracted for the original translation. Conversations with agency owners and product managers in organizations with high standards reveal time and again that they use the same list of a half dozen or fewer people for their best work involving law and science. So even if you, the corporate translation consumer or private individual with translation needs, choose the best agencies around, there is absolutely no guarantee that they will get the best translators for you. In fact, very often your work will be auctioned off on public sites like human exports from Africa used to be about two centuries ago, or it is pandered in mass mailings and given to "first response linguists" who might be good at some things but not at yours.

What can be done about this? A lot actually. Most of us wouldn't think of relying on streetwalkers for our social support and personal health, and building a relationship with linguists who will loyally and competently provide you with the best service you can hope for is easier than you might imagine. It starts by finding and connecting with the right people. And understanding the fair value for the services you require.

The mangled words in the picture above were photographed on the wall of an exhibitor's booth at the recent Security trade fair in Essen. I had my camera with me and, as I walked the floor with my copywriting partner, I could have taken similarly appalling photos at nearly every display in nine full exhibition halls. Some of these were the result of in-house "expertise"; many were the unhappy result of being serviced by agencies and their outcall "translators". Imagine the damage to corporate images!

There is a reason why premium freelance language service providers like Chris Durban have long passed cent per word benchmarks for piece rate translation that many of the better agencies consider unachievable and why others I know charge on a schedule similar to a good attorney. This is because smart companies and individuals understand that good communication is critical to surviving a difficult market. 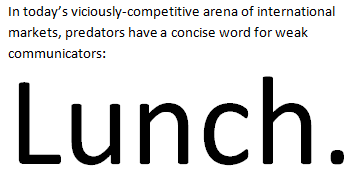 After the day at the trade fair, I talked to an agency friend who told me how happy his end client (who exhibited there) was with recent work I had provided, how much better the service was than anything the company had received before. Small mis-steps like giving earlier projects to a cheaper, less experienced translator after I had helped to acquire the client in the first place (and been promised the business into English) were forgotten. And I imagine that future relations with this valuable manufacturer of high quality safety equipment will soar as they should with a competent team. When I spoke to a freelance copywriter later and told her how, in the current market, I often have a picture in my head of many good translation agencies as biplanes, trailing a bit of smoke and losing altitude, coming close to the trees or to crashing into a hillside. Then they are borne up suddenly with an updraft of air, a competent translation or revision from a skilled linguist with an understanding of the field and a sensitivity to the psychological nuances of words. They rise and fly safely for a while until once again that saving wind is needed. She thought about that image, and about her future, and told me "This draught of air isn't drafting any more."

Posted by Kevin Lossner at 3:21 PM