Time and again I encounter problems with texts or translations because of dates. This is something we as translators and quality reviewers for languages products and services must keep in mind.

After a recent patent translation, my agency client was asked to provide translations of my appointment as a translator for the German courts and of my examination certificate for the state exams in Berlin in which I qualified as a specialist for natural science. The agency principal is a decent translator himself, and since translating my own certificates would be a conflict of interest, he undertook the task and sent me the results for approval. As expected, the translations were OK except for one thing... the dates. At the top of one translation, I did a double-take at the revelation that I was born in July, rather than October. The date stood clearly as 07/10/1961, and it took a minute before I remembered that Brits, Australians and some others write their dates differently than Americans do. The German way of writing the same date as numbers (07.10.1961) at least has the virtue of using a different separator than Americans use, and it's a different language, so it's hard to be confused there if you know the German custom. But in English, well... the trap is there.

A day later an English friend fell into the same trap in memoQ. She wanted to export some TMX data from a rather large memory - just the work of the last few days for a particular client. The export was made on the second day of March, and when there were some questions regarding the exported data and I was asked to look at the TMX file, I was surprised to see data going back to the third of February. Fortunately, the TM from which the export was made contained only data for that client, so no breach of confidentiality occurred, but in a general TM this would have occurred. What was the problem? She was thinking in "UK mode" and confused 02/03 and 03/02.

One way to avoid this problem is to use the International date format, as Kilgray does in memoQ's filter for the TM and termbase editors, for example: 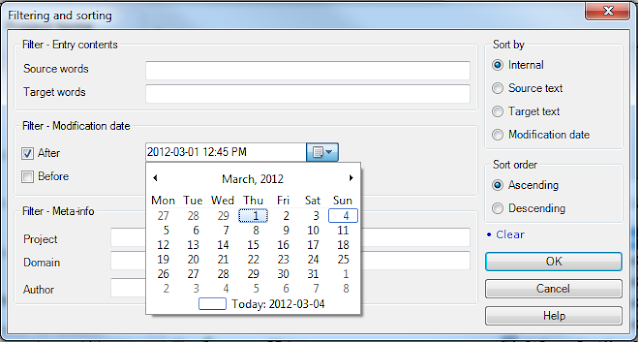 I am fond of using the international YYYY-MM-DD format wherever appropriate. I expect technical people anywhere in the world to be able to deal with it. However, this numeric format has its limitations too, because there are quite a number of people who simply aren't familiar with the format or who may be a bit dyslexic with numbers. The best solution in most cases is to use dates which include the month written as a word or a least an abbreviation thereof. For English, I would use a specifically American or British number format only if one is very, very sure that wider distribution will never be required.
Posted by Kevin Lossner at 11:58 AM