I hate to drive. I especially hate to drive on roads with German drivers. They often give me the feel of being trapped in the original Mad Max movie, and the tension differential when I cross a border into a country with more civilized driving habits is palpable. So I need a good reason to cross the country twice and go farther through other lands with signage I can't read and roads with conditions I would rather forget. Dogs are reason enough to drive 3700 kilometers or more.

Most of those who know me or read my blogs or forum rants know that I have kept and trained dogs for a number of years. Fewer know that I actually prefer cats, but since I'm a bit allergic to cats, and dogs travel better, dogs are now my companions of choice. I have a particular fondness for the Hungarian pointers known as vizslas, especially for the wire-haired variety. Their gentle nature (shared by their short-haired cousins) mean that most of the work of socialization that I used to invest in a German Shepherd can be put directly into other training.

I used to criticize the people of my host country who would drag back dogs from their holidays in other European countries, and I still cannot condone the irresponsibility with which many do so. But after becoming better acquainted with the dreadful conditions faced by discarded pets and working animals in countries such as Spain or Hungary, I cannot help but say a small prayer of thanks for each animal who makes it to a new home in Germany or elsewhere. The work of organizations here such as Fantelgarten e.V., Vizsla in Not or Jagdgefährten e.V. cannot be praised enough. I was very pleased to learn last year that Kilgray, the company which produces my current favorite tool memoQ, supports a local animal shelter in the country where they are based, and I hope that when my colleagues and their friends consider their charitable contributions that animals in need are not forgotten. Sometimes things that we would discard can make a difference in life. The fifteen puppies in the place I visited who died of cold for lack of warm blankets and bedding would have lived perhaps with some discarded sweaters.

The original plans for the trip came about when I learned in December that a good vizsla bitch in Csövár had just given birth to six puppies, three of them male. I had wanted a male from this line for some time, so I planned a trip in early February. Since it's a long way to the Budapest area and transport is often difficult to arrange for the rescue organizations here in Germany, I asked if there might be a dog or two needing to make the return trip. In fact there was, and one night a few weeks before my planned departure, half a carload of donations (blankets and dog jackets mostly) were delivered to my home. The other half of the car was filled with food donations picked up as I passed through Hannover on my way to Budapest via The Hague, where there was a gathering of Stridonium members planned shortly before I was to pick up my puppy in Hungary. Some of those attending had come from rather far away (one apparently got tired of chewing the seal blubber with Inuit neighbors and needed an infusion of Continental air), so I didn't mind the detour for good company and conversation with colleagues.

The real highlight of that weekend, however, was a magnificent tour of the Mauritshuis gallery in The Hague, where docent Nancy van Bavel shared her extensive knowledge of the Old Masters in an engaging way that by itself would have justified the long drive, the best such presentation I have ever experienced. The collection there is modest in size but of better quality than others I remember, and I look forward to an opportunity to return for another delightful afternoon of cultural education. One thing I found particularly appealing was that there is a better range of work for artists that interest me than I recall from other galleries, and Nancy carefully explained the development of the artists' techniques over the course of their careers and offered insightful comparisons with peers from the same period. If you pass through The Hague, the Mauritshuis should be high on your list if you love art, and even if you favor other periods, the sort of tour I experienced will make it a day not to be forgotten.

After a few days' inadequate rest punctuated by translation and consulting, I set off on the 1400 km leg of the journey, which took me through the southern part of Germany and Austria. In Austria I discovered to my consternation that LPG fuel is not available on major highways and that asking for it provokes a smug safety lecture from the inbred provincials at the filling stations. I was prepared on the return trip and filled up at the last station with LPG in Hungary, which got me safely through The Land of Wienerschnitzel back to Germany.

Safely arrived in Budapest, I transferred the carload of donations, looking forward to improved fuel economy and better driving safety, then afterward met Gábor Ugray, head of Kilgray's development group, to catch up on software and life. The next year should be one with pleasant surprises for memoQ users, but that's not really news, is it? 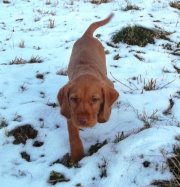 After the late dinner, I made my way up to the only dog-friendly hotel I could find near the breeder's kennels, and early the next morning I drove on summer tires over icy roads in a snowstorm to pick up my new family member, Csővárberki Jámbor, who will be trained to hunt according to the laws of the German state of Brandenburg. He was quickly adopted by my German Wire-haired Pointer, Ajax, who spent much of the rest of the day playing with him in the hotel room or in the snow.

The next day, the day planned for the return to Germany, I had to find winter tires to make the journey back through Austria safely. Although it was a Sunday, the hotel staff kindly contacted friends and acquaintances and arranged for an excellent set of slightly used Michelin winter tires to be put on the car for spare change. I had wanted similar tires in Germany but didn't want to spend the high price demanded for them, and with only one season's use these were almost a gift. 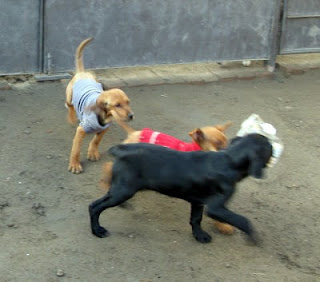 A few hours before my departure, the person running the dog rescue operations in Hatvan, which are supported by Fantelgarten e.V. in Germany, delivered the "ABC puppies" - Alpha, Billy and Chili. These wonderful little dogs had been set out on the street to starve, but Aranka and her friends rescued and cared for them until their transport to new homes could be arranged. The day before, or perhaps it was the same morning - the communication in English was a bit spotty - another dog had been rescued from the roadside where it lay dying in the snow after being hit by a car. I have met dogs who were thrown out of a car in a bag with other puppies (not all survived the landing), heard of bags of puppies hung up in trees to die and worse. The capacity for cruelty is all too human. But so is the capacity to do something about that cruelty.

With five dogs in the car, I headed off for the planned rendezvous in Regensburg, where two of the pups (A & C) were delivered, then after a night at the wonderful Hotel Bischofshof am Dom with three dogs (where young Billy munched a table - the staff were very understanding), we headed off to the last meeting point in a Regensburg forest to hand over Billy, and I made my way back to Berlin. The 3700 mile trip might have been shorter had I been able to read a map or make use of a working navigation system with Hungarian data, but not by much, really.

In the weeks since we returned, my little Hungarian import has thrived and added welcome spice to my routine. I look forward to training him and watching him develop. Some find that an animal "ties them down" and adds complications to life, but then I find most worthwhile things have some sort of complication involved. If, like me, you find that dogs have a place in translation, I hope you enjoy your canine companions for many good years. And please don't forget the ones who are not as lucky as yours.
Posted by Kevin Lossner at 12:19 PM