Translating websites is mostly a royal pain in the tush. And I avoid it most of the time. Why? Several reasons.

Shopping for "quotes" when neither you nor the one submitting a "bid" actually understand the technical basis of the project is a process with no guarantee of a satisfactory outcome. And too often this process turns out badly.

These days, many small companies use the popular content management system WordPress to manage their web sites. It may not be the best by some technical standards, but sometimes it is better to define "best" according to the likelihood of finding someone to provide services involving a platform and of there being such experts available not only now but for a reasonable amount of time in the future. I think it is fair to say that WordPress has met that standard for some time and will probably do so for some time more.

I have had a good number of requests for translating WordPress content in the past, but none of the estimates given were accepted, because typically the content to be translated was an order of magnitude greater than the client realized or nobody could commit to a clear decision on what parts were to be translated and what parts were unimportant. And then we have the problem that many sites use themes which are poorly designed as multilingual structures.

The WordPress Multilingual Plug-in (WPML) makes sensible, professional management of websites with content in more than one language much easier. When I learned about this technology more than a year ago, I suggested its use to the person who requested a quotation for translation services, but that suggestion is probably still echoing somewhere out there in the Void.

At memoQ Fest 2018 this year in Budapest, I had the pleasure to attend a superb presentation by Stefan Weimar on how to cope with the translation of Wordpress sites and some of what you need to know to use the WPML technology right. I was inspired and hoped to have an opportunity to look at things more closely some day.

That day turned out to be a week later. Funny how that goes.

Three or four years ago I translated a small web site for a friend's company. At the time, the site used the Typo3 content management system, which proved to be troublesome. Not so much because of the technology, but because of the service provider using it, who rejected any suggestions for providing the content to be translated in a form that would not require his manual intervention at the text level. He copied, pasted and improved (German: verschlimmbesserte) my translation as only a German with full confidence in his grade school English skills could. It was... not what anyone had hoped for, and I never  found the heart to mention all the mistakes in the final result.

So now, when someone asked me to have a look at their new site, I felt a bit queasy. Nunca mais, I thought. No way, José. Or Wolfgang as it were. But in the meantime, unbeknownst to me, he had switched service providers and CMS platforms, and the new provider managing his web content is a professional with a professional understanding of sites for international clients in many languages. And he uses WPML. The right way!

So now it was up to me to figure out what's what in memoQ. So first I used the memoQ XLIFF filter on all the little XLIFFs supported by the plug-in. I quickly saw that a few other things were needed, like a cascaded HTML filter... 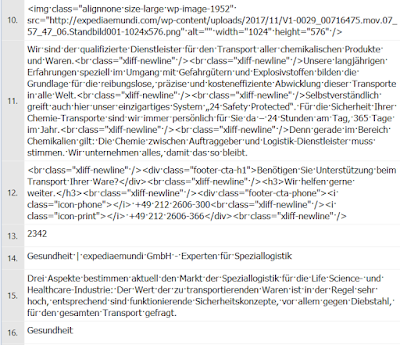 Somewhat messy, but doable once the HTML tags get properly protected by a chained filter.

Then I tried again, this time applying memoQ's WordPress (WPML) filter. And this was the result:

That was easy. Hmm. I think I know which method I prefer.

So for translations of WordPress websites properly configured to use WPML technology, the new memoQ filter looks like a winner!

Posted by Kevin Lossner at 9:32 PM