Like many people, I keep several versions of memoQ installed on my computer at the same time. Some of these are newer versions, which are strictly for testing until I have determined that they are completely stable for the processes I rely on in my work. Others are older versions needed for compatibility with particular client servers that have not been upgraded yet.

One thing that has always been somewhat inconvenient to me in maintaining multiple versions of the software on my computer is the fact that Kilgray does not distinguish the icons at all between versions, nor do they distinguish the icons used for various auxiliary programs for memoQ, like the web search and the very useful TM external search tool. Well, I fixed that.

I created a series of new icons to distinguish the shortcuts I use to launch various memoQ versions and the memoQ TM search. They are available here, along with the original 64x64 pixel memoQ icon in case somebody wants to do a different custom icon based on it. 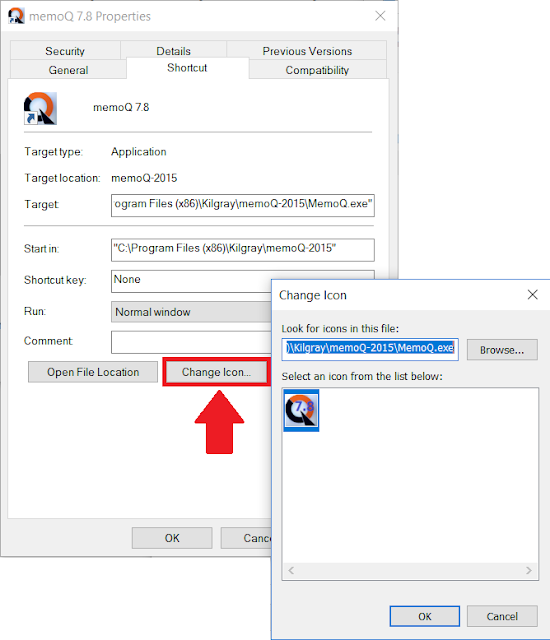 Changing the icon for a program shortcut is very simple. Simply right-click on the shortcut on your Desktop, for example, and click the Change Icon... button to open the corresponding dialog, from which you can select an icon file (*.ico) or a program from which to extract an icon for use.

There are, of course, other approaches, such as using the free Resource Hacker tool to change the icons used by the EXE file. But messing with executable files isn't really advisable in most cases.

If you have artwork to convert into an icon (ICO file), this can be done using the free CONVERTICO web site:

The site can also convert ICO files into bitmap files that can be edited using Microsoft Paint or other applications. Click on the logo above to go to the site.

Changing the icons for my shortcuts give me a better overview on the Windows taskbar of what is actually running when I work with some version of memoQ:

The Windows Taskbar icons seem a little fiddly to change. It took me a few tries of pinning and unpinning the application on the taskbar before the icon appeared right for memoQ 2015 (7.8), while the newer version looked OK on the first try. It's probably some sort of Windows Registry issue. In any case, the icon change for the desktop shortcuts works every time, and that at least gives me a better visual overview so I don't launch a version of the program I don't intend to work with,
Posted by Kevin Lossner at 1:44 PM