When translating patents, legal briefs, reports, manuals and many other kinds of documents I inevitably encounter figure references to photographs and illustrations in the text as well as the labeled captions for these. In this morning's translation of a petition in a nullity suit, one such reference takes the form in Verbindung mit Figur 1,  but it might just as well appear as

in this or some other text; in documents with multiple and/or sloppy authors I might even find a mix of all these in the same text.

As I value consistency in writing even when the client might not care, I try to translate all of these to the same form in English where it makes sense to do so. That might be Figure 1 or Fig. 1 depending on the situation and the styleguide stipulated for the project.

But when I finish the 10,000 or so words for this job and need to do my final check before sending it to the client, I expect to be a little tired, and I want to use my attention and energy to focus on the accuracy and reading comfort of my translation. In doing so I tend to miss little details like the occurrence of "Fig. 1" on page 32 as opposed to "Figure 1" on the other 40 pages. That is why I use the QA feature of memoQ to check the consistency with which I have translated the figure references as well as other matters such as the accurate use of special terminology for the project.

The specific feature I use here for quality assurance is 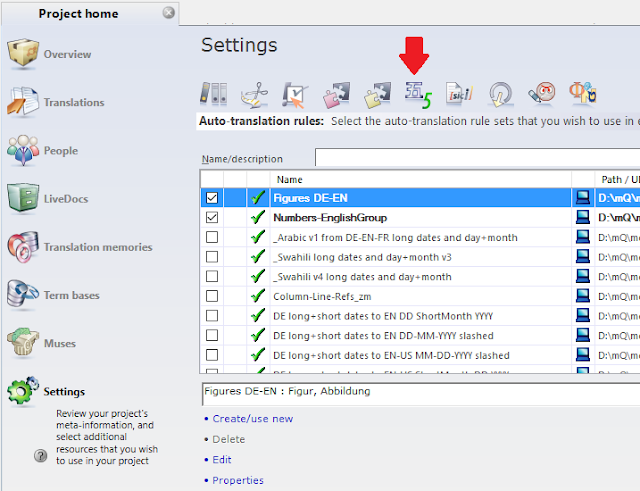 an auto-translation rule set (aka "autotranslatables"), which is highlighted and selected in the screenshot of the project's settings above.

As I have stated many times before, autotranslatables should be used, but not created by the average translator. Aside from the fact that the regular expressions involved are not particularly easy even for most of the nerds among us, there are a lot of little subtleties that make the difference between a well-functioning rule set and annoying garbage, and even the "experts" struggle with this for sophisticated rules.

But the present example of Figure mapping is a comparatively simple case which can illustrate the principles and some of the "risks" to mere mortals. 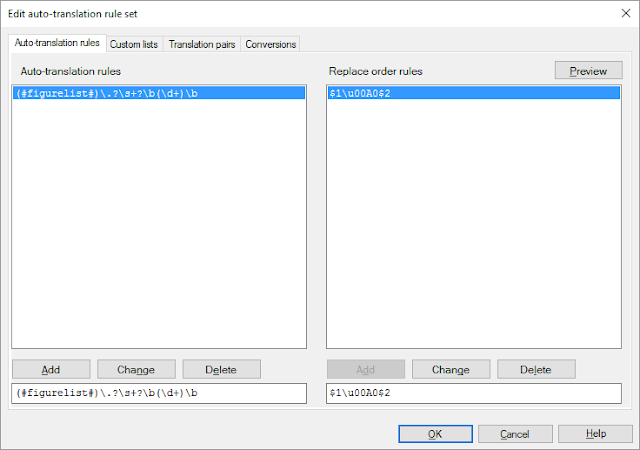 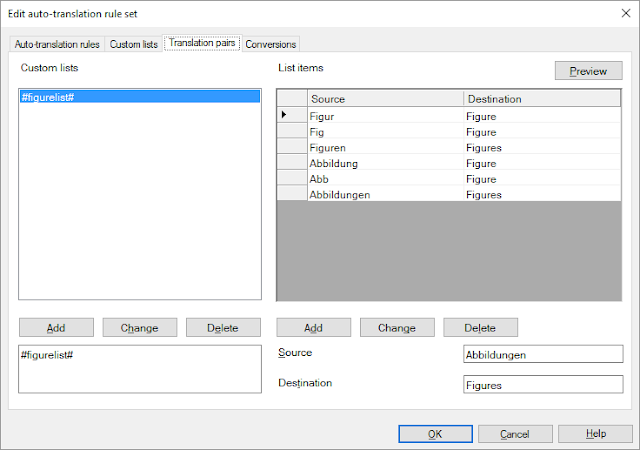 My rule set for mapping figures from many German forms to a particular English form consists of a single rule.

All of the possibilities that I expect in German are compiled in a list, along with the English expression for each, and this translation pair list is named #figurelist# and is found on the corresponding dialog tab in the memoQ rule set editor for autotranslatables. (I usually edit rules externally in Notepad++ where I can comment them liberally, but in this case I felt no need to do so.) This named list is used as a variable in the regular expression for the rule to describe a source text match.

Jeepers. That regex for the source text looks complicated, doesn't it? Wouldn't (#figurelist#) \d+ be just as good? After all, it seems to work just fine. Well, except that the list would need a few extra entries to account for abbreviations with and without periods.

No. "(#figurelist#) \d+" is total, incompetent crap. Here are some reasons why:
The regex for the result also appears more complex than it should be, but there is a reason behind that as well. Instead of the simple $1 $2 (first group followed by a space followed by the second group), I specified output with a non-breaking space, because it looks rather unfortunate to have a line wrap in the middle of the expression for a figure. One sees that a lot, because it's a nuisance to remember to type non-breaking spaces all the time on the keyboard. This rule can also be used to check the use of the non-breaking space; an ordinary space will generate a warning when the memoQ QA profile is run with the autotranslatables check activated.

There are many ways in which regular expression rule sets can enhance the user experience and the quality of translation results when working in memoQ. It is not hard to use these rules, but it is beyond most users to create and maintain their own rule sets. Therefore

Post scriptum:
An yet ye hack by night and sun, the work of regex be never done.
Of course something was forgotten in the example here. The myriad styles and customs of source text authors will inevitably offer up challenging variants to break your well-crafted rules. Today's is a text full of figure references like Abbildung 4.12, which would refer to the twelfth figure in the fourth chapter. For this the modified rule might be

Or perhaps not quite. Try it and you'll see a few problems. This is just another example of why it is good to make use of professional resources to help you with these challenges and to have a systematic way of recording and elaborating them. I'll explain more about such an effective system for planning and documentation in a future article. I've noticed that the "experts" in the translation field often care little for the usual standards of project specification, perhaps because they are sick and tired of translation projects with so many specification documents for those who know better.

Posted by Kevin Lossner at 9:17 AM