Surprises from the IAPTI 2014 conference in Athens

I stopped traveling last year; the stress of dealing with ridiculous airport security and my uncertain resident status in the country of my choice (Portugal, resolved in April of this year) simply were not worth any benefits I could perceive from attending professional events or even visiting family. Thus from autumn last year until spring of this year I battened down the hatches and waited for the weather to change. In that time I declined some seven or eight speaking invitations for language service and technology events, even skipped the memoQfest in Budapest for the first time. My withdrawal from public presence in the world was also facilitated by a growing dissatisfaction with the same old suspects at conferences, saying more or less the same things - often with the same script - and the creeping transformation of these platforms into vehicles for sales and seldom-interesting corporate success stories better read in a brochure or blog post somewhere. Events which were formerly inspiring sources of useful technical and business information had become corporate echo chambers of declining value or simply boringly repetitive. This feeling was shared by others, including one friend organizing premium workshops and conferences who is determined to break the dull mold in which too many events are now set.

I had been aware of the International Association of Professional Translators and Interpreters (IAPTI) since the organization was founded in 2009, when I was asked to join the ethics committee and declined for lack of time. After that I could not help but note some of its development given how small the world of translation is, but although its ranks grew to include a number of colleagues who have earned my greatest respect for their skills and conduct, some actions like nagging letters to various governments about the shocking situation of native interpreters stranded in conflict zones in Iraq and Afghanistan and the somewhat confused battle over HAMPsTr work made me wonder whether the organization's energies were well-focused. Nonetheless, my ongoing discussions with colleagues in the group made it clear that many of the assertions in strangely biased EU publications, private forum discussions and public media statements by some persons with particular corporate interests were not entirely accurate.

So it was the spirit of investigation which led me to accept the keynote invitation soon after receiving my Portuguese residence approval which gave me a permanent base in a Paradise too often disrespected by the frigid North. It was not entirely unlike my decision to travel often to the old German Democratic Republic many years ago to be a witness to the real conditions there and not rely on the reports and opinions of the ignorant or those with particular political agendas. And the Athens meeting proved to be quite a surprise. An excellent one.

I am reminded time and again how careful we must be of third-hand "knowledge" and impressions formed through social media. As an example, I had certain impressions of a colleague whose social media contributions and mentions I had followed vaguely for four or five years on LinkedIn, Facebook, Twitter and various blogs. I knew this person as a young attorney, recently graduated, of South American origin and bright, but.... Wrong. The colleague in question proved to be a Ph.D. engineer of European (non-Latin) origin with quite a different background and impressive depth for one so young... and who, in fact, proved to be about 15 years older than I thought. I identified a number of other, similar mistakes about colleagues and the IAPTI organization as I took a careful look in the days I was their guest in Athens. And the openness of the organization's officers with details of past events involving ethical positions resolved the last questions I had.

In the past when some friends asked my advice about joining professional organizations, I consistently advised them to focus on the large, established groups such as the ATA, ITI, IoL, SFT, BDÜ, AdÜ Nord, etc. A big part of this is my belief in the concept of "think global, act local". Considering the utter uselessness of organizations like the FIT (an umbrella organization for professional associations whose purpose is unclear even to many of its members), I was highly skeptical of a young "international" organization like IAPTI to exert much real, positive influence on the professional experiences of its members in a way that involvement in local organizations can. In my own primary market (Germany), the BDÜ has put in efforts for resolving problems involving the compensation of court-sworn translators and interpreters which I could never expect from any grouzp spread across the globe. And local meetings, training events, etc. in so many national organizations offer value to new and experienced professionals which I could not really see happening with a group officially domiciled in Argentina, no matter how wide a distribution of local members it claims.

I was, of course, overlooking some obvious parallels, including a certain commercial organization which too often serves interests contrary to the well-being of translating professionals. And when I formed my opinions of the importance of local (national) involvement versus fuzzy-headed internationalism, I had not given full consideration to the growing cross-border nature of the language professions and the need to consider its implications. Nor was I fully aware of the extent of ethical compromises in some of the major professional organizations and the stubborn insistence of some leaders in these to continue to support ethically and morally debased individuals and professional practices, including the unprofessional hampsterization of translation with inappropriate applications of MpT technology.

What I found in Athens, upon closer examination and many hours of tiring but encouraging discussion, was an organization with clearer concepts than were apparent in much of the public banter and one with an ethical foundation which I believe to be among the soundest I have observed in associations of language service professionals. I still take issue with some thingsa, but these are minor matters, and the willingness of the IAPTI leadership to engage in honest, transparent discussions of differences is very encouraging. One executive at a major translation company commented that I had chosen to speak to "the Shiites" by agreeing to the talk in Athens, which was surely meant to say that I was putting myself in league with crazed fanatics - though if I'm not mistaken, most of the suicide bombers have Sunni ties of some sort. Not a helpful comparison in any case, as even my valued Sunni colleagues are unlikely to blow up anything more than balloons for their kids' birthday celebrations.

This blog has been fairly quiet in recent months because I've been occupied with resettlement on a lovely small farm and various personal arrangements, and I was growing tired of engaging in the same arguments with advocates of inappropriate machine pseudotranslation (MpT) according to the principle of not arguing with fools, because others might be unable to tell the difference. But - despite a rather nasty flu resulting from the stress of travel - I have returned from my time in Athens with more professional inspiration than I have felt in years, which will likely result in a number of blog posts as I examine some of the interesting matters discussed at the second international IAPTI conference in Athens last weekend.

My current understanding of IAPTI is that, despite its relative "youth" (about 5 years of existence), it is a professionally and ethically credible organization worthy of serious attention by translators and interpreters. Unlike some other organizations (such as the ATA) it does not serve multiple masters by trying to include corporate members (my own association, the BDÜ, is also admirable in this regard, allowing only individual membership by qualified translators or interpreters, although these individuals may in fact head translation companies of any size). The concerns of translation companies and related organizations are not de facto in conflict with those of individual service providers, and indeed I have always considered boutique agencies operated by qualified individuals with a good understanding of professional practice to be among the best allies of freelancers. But I think a separation allows for a better focus on the particular needs of each, and those of us with a foot in both worlds are well enough able to follow the paths of personal and organizational growth as we need in these separate organizations.

The level of professionalism and the relevance of the content presented at the IAPTI 2014 conference in Athens frankly blew me away. I cannot say how pleased I was to have delivered the second-worst talk I attended on the first day. I even heard a presentation by a young attorney describing in a carefully limited scope possible approaches to protecting the profession against unqualified and harmful intrusion in the provision of medical and legal translation services. When people start talking about "regulating" the profession of translation, I generally mutter something like "yea, yea, wordworkers of the world unite - fuck you" and excuse myself from a pointless, naive discussion. This guy carefully differentiated areas in which restrictions were both desirable and legally feasible and distanced himself from ridiculous ideas that all of translation itself could or should be restricted by some sort of silly national or international guild.

Most of the presentations were on a much more practical level and would have fit well at any professional event I have attended in the last 15 years. All were presented with a consistent competence and relevance which has been sadly missing at other events. Too much time is wasted at a great number of events, where the purpose of a presentation is clearly sales or bragging about some server integration or corporate success story of limited interest to freelance service providers. Such presentations are not worthless by any means and may indeed be exactly what a corporate department or translation agency manager needs, but often the mix of these with content more focused on individual interests results in a brew which satisfies the legitimate interests of neither group. What I saw in Athens was a conference which was uncut, mainlined nourishment for the interests of individual translators and interpreters without denigrating the interests of others with sound ethics and business practices.

So watch this space... there are many thought-provoking matters from the conference in Athens which I feel are worth discussing on this blog. And based upon my experience I would recommend the next IAPTI conference to any of my professional peers. 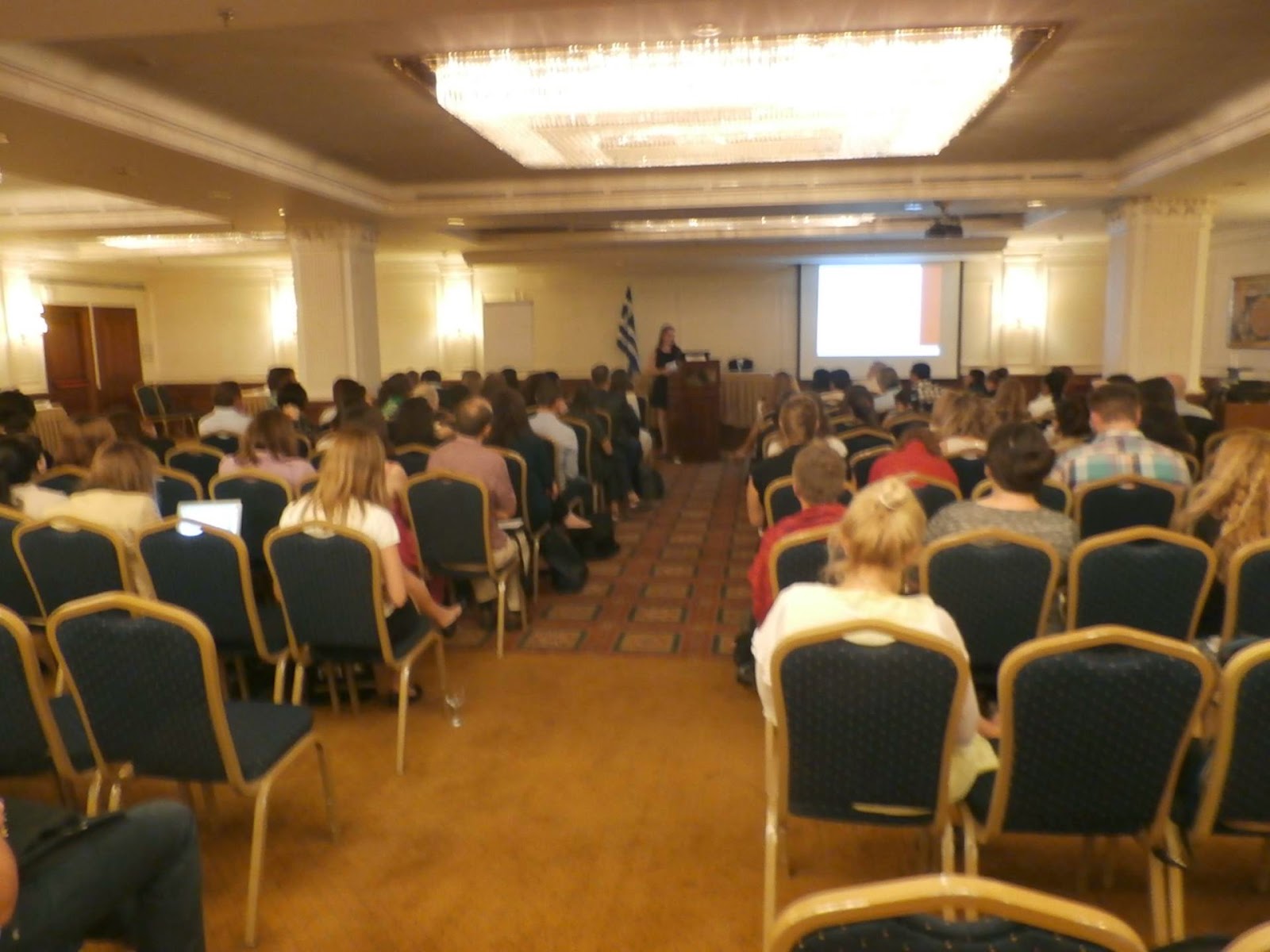 
Anmerkungen des Übersetzers: IAPTI 2014 in Athens and the Day After

What I did before, during and after IAPTI’s Conference in Athens: Confessions of a freelance translator/mother-of-two.