The recent Kilgray blog post about the "terminology as a service" (TaaS) project reminded me of the considerable unfinished business with the term extraction extraction module introduced three years ago with memoQ 5.0. It's a very useful feature that I apply frequently to my projects, and my prediction years ago that it would not replace SDL's MultiTerm Extract in my workflows was wrong. Overall it proved to be more convenient, and after the shock of discovering that the defective logic of MultiTerm Extract created new German "words" that neither existed nor were in my text sources, I dumped that dodgy tool and stuck to memoQ's extractor. But sometimes its rough edges are irritating, and I wish Kilgray would finally pick up the ball that was dropped after a great start in the game.

One of the major weaknesses (aside from never remembering my changes to the options or my preferred settings for extractions) is the management of stopword lists.

Overall, Kilgray's approach to stopwords is reasonably sophisticated; some time ago I published a rather incomprehensible post in which I demonstrated how the "stopword codes" - those three digit binary numbers which appear stopwords - control whether a word can appear at the start, the end or the middle of a phrase even if it is excluded as a single word. These codes are quite useful in some cases. However, they also complicate the use of stopword data for most users.

memoQ includes only a few stopword lists for a few languages in its shipping configuration - German, English, French and Italian I think. Not even all the user interface languages are included. That's rather sad, because there are quite a few public domain stopword lists available on the Internet. However, most memoQ users have absolutely no idea how to incorporate these in memoQ, and Kilgray offers no features or information that I am aware of to facilitate this process.

I was reminded of this problem when I was asked to discuss terminology mining with masters students at my local university in Portugal. I thought it might be nice for the students to be able to make use of the stopword lists they could find on the Internet for their target languages (Spanish and Portuguese for that group). These lists are typically just text files of single words. When I build my own master stopword list for German a few years ago, I gathered half a dozen or more large, mostly redundant lists for a start. Then I carried out the following steps:
Afterward, the stopword list you imported will be available  when you start a term mining session using Operations > Extract Terms...

During an extraction session, words can be added to the chosen stopword list (one at a time unfortunately - I've been asking for multiple addition as a productivity measure for 3 years now so far) by selecting a term and Clicking the Add as stopword command or pressing Ctrl+W.

You might be a little confused if you look for words you've added to a stopword list from the term extraction interface. They are not inserted in alphabetical order, but instead at the end of the words starting with a given letter. Thus, for example, the red box in the screen clipping below shows all the words I've added to my previously alphabetized list since I created it: 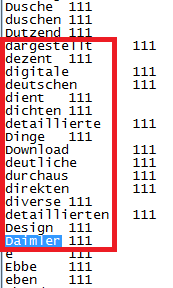 Posted by Kevin Lossner at 2:33 AM