For years now, I've watched the German term Medienbruch and derivatives like medienbruchfrei seep their way into various, well, media. And the results are, by and large, linguistically discontinuous and/or broken :-) 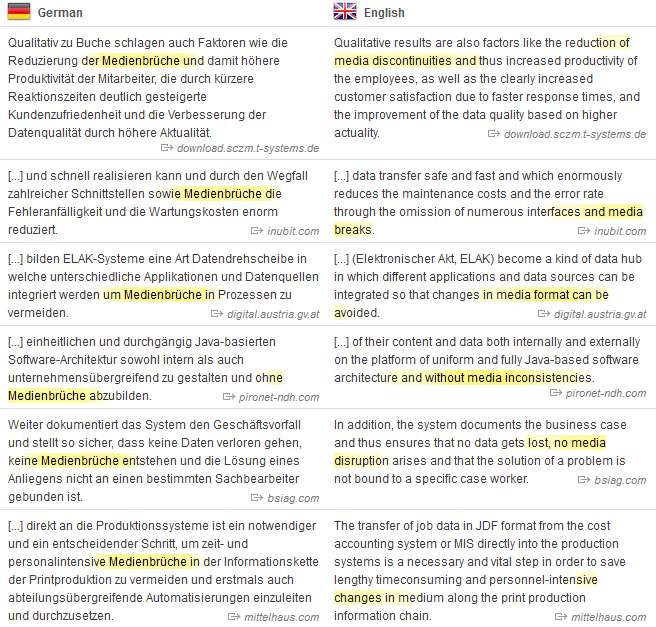 The screenshot above shows a sampling from the "feast" of bilingual web alignment offered by Linguee, one which those who are familiar with the service realize must be enjoyed with some care to avoid the odd bits of broken glass and strychnine that may be found in its sometimes machine-translated, sometimes Bulgarian-inspired English. Some of the more thoughtful marketers in the translation profession may use the site as a source to research firms desperately in need of better translators rather than merely pan its buckets full of linguistic swamp sediment in desperation to find the few flakes of gold which might have settled there. Not to say that Linguee is not a valuable working tool, but its use requires a great deal of professional judgment in most cases and often further research is one is on unfamiliar ground. It is a tool, and a fool with a tool remains a fool. Like the often criticized Wikipedia, it is often a good starting point but seldom the journey's end.

Why not just Google "media discontinuity", for example, and see how often the particular phrase occurs? Uh huh. You got 8,100 results, did you? Sounds pretty authoritative, right? Look again at where the sources are. Ah, you say, Kevin ought to have used Google's advanced search options to narrow it down. Have a look at the garbage on the first page again, and tell me with a straight face that better sources will somehow rise to the top of that like tasty cream.

At this point, a colleague less overcaffeinated might point out that I'm going about this all wrong and that I might do better searching some of the monolingual corpora available free online, such as the British National Corpus (which is great for making Americans believe that Brits really do say "at the weekend" most of the time or the BYU Corpus of Global Web-based English, which allows those who master the arcana of its search rules to compare Indian weekends with those in Canada or Kenya. But these text collections, for all their value for a general understanding of common language use, are seldom satisfying for specialized use and neologisms.

A cooler head might point out the terrible bias in my approaches so far and encourage me to consider the context in which this word has occurred while percolating into my awareness in recent years. Hm. Well, usually when some German public authority decides to bring its information management practices up to 20th century standards. Since they usually follow well behind practice in English-speaking countries for this sort of things (I still see German government texts that put "E-Mail" in quotes as if it were something new and exotic), it's a good bet that a corpus of texts from similar institutions in the UK or US might reveal some interesting and useful and even natively acceptable possibilities. (That's how I learned years ago that a usual and proper term in English for Vieraugenprinzip is "dual review", not the "four-eyes principle" that some so happily click their heels to. In the elementary schools I attended, that was the principle based on which bullies punched my friends with glasses in the face.)

Juliette Scott, who writes a rather nice blog mostly concerned with legal translation issues, has done some nice (NIFTY) work as part of her doctoral thesis using monolingual corpora to study patterns of use in target languages and suggest useful strategies for building collections of specialized text. Good, perhaps even obvious stuff which applies to any domain I can think of, though the practice of building focused corpora from carefully selected sources is still far too rare among those of us who use the label "translator" or "language professional". I certainly need to do that more often.

Ah, but if I have just a monolingual corpus to understand proper use of terms in the target language, how will I know what the right translation is? That's a hard one. One that perhaps I can't answer. At least not without the use of a BAT* tool. But if that's too hard, I know just the place to go: proZ.com, where "certified pros" compete for points on KudoZ and offer mutual reinforcement and enlightenment to those who run rapidly on their wheels to keep pace with changing expectations of quality.

I could of course take one of the accepted "solutions" from Linguee and feed the same sort of self-recycling GIGO loop that Google now admits to be an ever-growing part of its searched wisdom.

So what is your solution to the Medienbruch? Or are you part of the problem?

Posted by Kevin Lossner at 5:43 PM