Cleaning up a crappy OCR job for translation

It's a sad fact in the professional work of translators that a lack of understanding on how to deal effectively with various PDF formats causes enormous loss of productivity and results which are not really fit for purpose. The aggressive insistence of many colleagues possessed of a dangerous Halbwissen on using half-baked methods and inappropriate tools contributes to the problem, but, bowing to the wisdom about arguing with fools, I now mostly sit back with a bemused and amused smile and watch the tribulations of those who believe in salvation by PDF import filters and cheap or free OCR. "TANSTAAFL" is a true as it ever was.

Just before the weekend I got an inquiry from an agency client I rather like. Nice people, good attitude, but struggling sometimes trying to find their way with technology despite some in-country "expert" training. This inquiry looked a bit like ripe fish at first glance. The smell got stronger after I was told that because the corporate end client had converted the PDF for their annual report and begun to edit the mess (and comment it heavily too) in the OCR file that this would be all there was to work with. It was a thoroughly appetizing sight when imported into a translation environment: 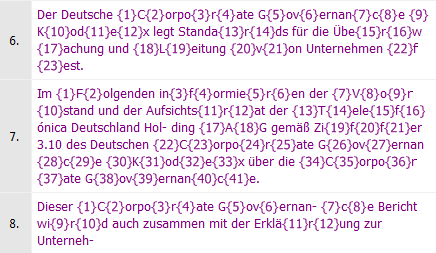 There are so many issues in that tossed salad of translation terror that I don't even know where to start describing them.

The screenshot above was in memoQ. How does it look in SDL Trados Studio? Often just as messy. In this case, this was the result in an older version of Studio:

SDL Trados Studio choked and refused to import the file!

I do have the latest version of SDL Trados Studio 2014, but unfortunately it's on a system that does not yet Microsoft Office, because I refuse to bow to Microsoft's insistence that I must buy a Portuguese version of that software. No MS Office, no file import in this case with SDL Trados Studio. memoQ fortunately has not needed MS Office to import its old file formats since the release of memoQ 6.0.

Ugly OCR trash like this file is all too common at this time of year, and as I am busy compiling the syllabus for the workshop I want to do on better living with well-used technology for legal and financial translators, I felt obliged to take this one on as a teaching example. It's actually not as bad as it looks. On the other hand, the best approach may not always be obvious, and the best solution for one document may not apply as well or at all to another.

My first approach was to use Dave Turner's CodeZapper macros. This isn't as straightforward as it used to be since I downgraded from Microsoft Office 2003 to later versions; for some reason the toolbar refuses to stay loaded between work sessions, and there's no way I can keep track of all the abbreviations for macros on it.

I can't deal with anything more complicated than clicking the "CZL" option for "Code Zapper lite", which did a rather decent job on the heavy mess above:

But all was not quite as well as it seemed:

Text in the header and footer remained trashed, and the heavy use of comments and tabbed lists meant that there were plenty of legitimate tags to deal with which were just too confusing with the DVX-like mess of memoQ's default import and display for an RTF file.

So I went for a kinder, gentler approach. I changed my import filter settings in memoQ: There is actually seldom any good reason to import an RTF or DOC file into memoQ using the default filter settings. And marking those two little checkboxes at the bottom often accomplishes much of what CodeZapper does. Sometimes less. A bit more in this case.

The header and footer texts were absolutely clean. Don't let the extra tags in this sample fool you: overall, there were fewer than in the code-zapped file. Now there are still a number of issues to be seen in the screenshot above, including paragraph breaks in the middle of a sentence and awful manual hyphenation (many instances of that in the whole text) and joys like badly placed comments and links which mess up the text and prevent term identification by the software:

Source editing features of memoQ (F2) enable issues like the two above to be dealt with easily:

After a bit of repair like this in the memoQ environment (where it is really much, much easier to fix the problems of bad comment and link placement), I copied the entire source text to the target to enable me to export a cleaner source text file. I then opened this file in Microsoft Word and used various search and replace operations to fix the bad hyphenation and other problems like excess spaces. Replacing the hyphens had to be done occurrence-by-occurrence, because the style of writing in German meant that there were many legitimate instances of hyphens followed by spaces.

After all was done, the "before and after" looked like this:

The remaining tags were all legitimate formatting tags for comments, hyperlinks, tabs after section numbering, etc. These do, of course, require attention and add complexity to the work still, so they must be included in the charges for the job. memoQ makes this calculation particularly simple by allowing weighting factors to be specified in the analysis. These are the settings I typically use for a German source text:

I find this usually represents a fair minimum for the additional effort in translation and quality assurance that tags require. In this case, of course, time charges for the cleanup apply, but as you can probably guess from comparing the two analysis tables above, the customer is actually saving a lot of money by paying me to clean up the mess, and the results will be a lot more usable. My cleaned-up version of the source text will also be returned in case the authors intend to make more revisions in the source - this will save more time and money by avoiding redundant cleanup in that case.