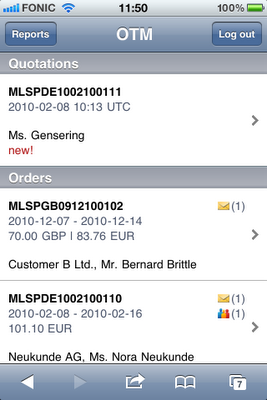 In recent years it seems that quite a few of my colleagues and customers have made smartphones part of their business. I'm not part of that crowd; years of being an early adapter of PDA technology (Palm devices, Sharp Wizards and a host of other long-forgotten gadgets) and other computer-related junk has made me a bit allergic to the technology, and the trauma of short-circuiting a 500 euro mobile phone by dropping it in a toilet and having another phone of the same class fall from my pocket as I ran to catch a train has made me a stubborn minimalist when it comes to phones and other electronics. Add to that the fact that I've found myself up to my hips in swamp water a few times in recent years while hunting boars, I tell myself that the last thing I need is an iPhone in my back pocket (where I once sat on and broke two Sharp Wizards).

And yet... after a friend recently showed me how to go offline with my phone the other day so I could avoid interrupted naps and sleeptalking with puzzled clients and friends, I began to think that maybe, just maybe, there could be a place in my routine for a little more gadgetry if indeed I can switch it off at those times when the 24/7 world does not interest me. Over the past year I have come to rely on the security and efficiency of the Online Translation Manager from LSP.net, which offers greater scope and scalability than any other business management tool for translation that I have seen and can fit in my budget and temperament. Now my #2 business tool (after my main squeeze, memoQ) has a rather functional interface for smartphones, and I'm very, very tempted. What the heck: I need a new digital camera, and my iPod died a horrible death a few years ago as I was backing up my translation archives onto it (how would you like to choke on a folder full of German patents?), so maybe I need to make a quick trip to the UK and get an unlocked iPhone. AFAIK the German market is still rather monopolistic. (Update: Perhaps that's not the case after all. FONIC sells the iPhone 3GS 8 MB without a contract for just under €500, which usually means it's not SIM- or net-locked. Combined with Skype for iPhone, the iPhone's WLAN capabilities and my Skype flatrates, this is starting to look very good. I've also been reminded that Apple's exclusive contract with a certain mobile service provider in Germany has expired, so the German Apple Stores sells devices with no lock. Nonetheless, I'll find an excuse to visit the UK. It's been too long.)

The iPhone screen shot here was made while the developers were showing me the new interface last week. It tells me as a project manager that there is a new quotation request (don't let the date fool you - this is on a test system where the wildest things happen), unread incoming on another project, and unread incoming e-mail and a delivery from a subcontractor on another. I can now assign tasks, respond to the mails and carry out other necessary project management activities. If this interface had been available in recent months (and I had a device to use it), a number of urgent requests from cherished clients during the busy holiday season wouldn't have gone to the dogs. (Other dogs, not mine.) For reasons I have not yet fathomed, a number of clients who used to pick up the phone to communicate an urgent request now assume that I'll be sitting in front of my screen to respond ASAP. Come to think of it, most of these send me e-mail where the footer indicates that the message was sent from a CrackBerry. OK, OK - I surrender.

Seriously, though: this is an extremely useful feature that I hope to see expanded soon to include the customer and supplier ("resource") interfaces. It makes a good business management environment even more useful and relevant.

Release update (compatibility): This feature was developed with and tested on Apple iPhones for the most part. A Blackberry interface was developed as well using a simulator from RIM, due to the wide variety of devices and the unavailability of many for testing. It seems that the display does in fact function differently between different models, so the optimized smartphone interface may not be ready for many Blackberry models; these will have to rely on browser access that is unoptimized. Other smartphones may be able to use this feature by changing the value of the user agent (in Firefox there is a plug-in for this), which usually involves some seriously nerdy settings tweaks in the browser. In summary: iPhone? Not a problem. Anything else? Maybe, but expect to work at it. I'm betting that there will eventually be a generic small device interface parallel to an optimized one for popular devices such as the iPhone. It would make sense. Even with one, however, I'll eventually join The Cult again and visit the Apple Store.
Posted by Kevin Lossner at 2:38 AM