Results of the Trados user survey 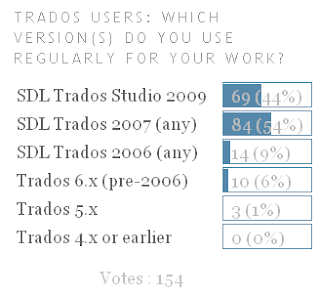 After my first fling with the Google Blogger polling tool, I decided to look a little more closely at the breakdown of the "Trados users" who had responded to the poll.

The new poll asked about the use of various Trados versions. Personally, I use two older versions (2007 & 2006) and once in a while I trot out MultiTerm 5.5 for clients with Stone Age termbases. I'm still testing Studio 2009, though most of my objections have been dealt with adequately over the past year, and if good people like Paul Filkin and Roger Lai can effect a change of culture at SDL Trados so that insulting marketing campaigns like the disgusting "amnesty" a while back are not seen any more, I could envision myself accidentally recommending an SDL product beside MultiTerm or Passolo for productive use. It might take a lot of Unicum to get there, however.

But SDL Trados Studio 2009 looks good on a netbook for the most part. I'll have to give them that. The Hungarians in whose technical footsteps they follow have some optimization to do for that environment. And as requests for Studio 2009 projects pick up, I'll inevitably look more closely at interoperability issues with that environment, and from what I've seen so far, I don't expect to be terribly irritated.

The responses in this poll were not exclusive (as anyone with rudimentary addition skills can discern). So someone who uses both the latest version and the previous one for various clients should have (and presumably did) mark both responses. To me, the results indicate however shakily (due to the low number of poll responses) that SDL has moved successfully to the new generation of technology and established a sufficient base of licenses that it will remain viable for the present generation of translation environment technology. That was to be expected given the momentum involved. But there remains great skepticism among the old user base, and when I talk to agency owners who describe the technical challenges they face with data conversion and interoperability, very often I must point out that what they are looking for is currently offered only by the memoQ Server at a friendly price that might make those who invested in other TM server technologies reach for the Alka Seltzer. In one big Berlin agency I'm close to, the license for SDL Trados Studio 2009 was purchased months ago, but there's no hurry to install it as the project managers ask me to write up procedures for Déjà Vu and memoQ to handle insane character mapping problems for Java properties files in Greek, which the last Trados 2007 could no longer handle well. I assume Studio 2009 can deal with the problem, but the trust seems to be gone. Similar reservations have been expressed by other agency owners who have used Trados since version 1 and are frustrated that when problems arise, the chaps on the support line know far less than they do and read from a script. Meanwhile, in the Wild East, software-slinging CEOs and heads of development still provide competent, detailed, personal support for devilish technical challenges at odd hours.

On the whole, I would say "good job" to SDL for having kept so many users "in the boat" by getting them to buy Studio 2009 licenses. And I hope they can keep them there by expanding the usefulness of the product for all by not only improving its performance (use of resources) but also all aspects of interoperability so that it can become a true universal work tool for translation, even including connectivity to other server systems for its desktop users. To the extent that one can claim any tool provider is in that race, they are not yet in the lead.
Posted by Kevin Lossner at 8:59 AM