Take out the garbage!

We all need to do it once in a while so the house doesn't stink too badly. The same goes for online information: the accumulation of stale, irrelevant, obsolete and undesirable infotrash that accumulates really stinks after a while, and I don't imagine it's particularly helpful to one's "professional brand". Before the beginning of this year I had a sense of nagging irritation about outdated profile information on various portals where I had once registered and then forgotten because they were of little or no value. Worse yet in my mind are the portals that "register" me without my permission, having scraped the data from elsewhere. Social media sometimes remind me of a social disease with their harmful promiscuity of errors and obsolete data. 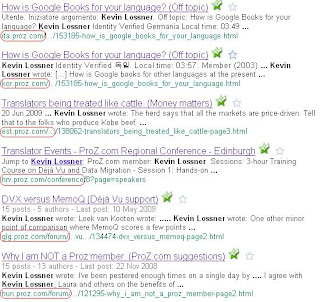 But the worst offender, as it turned out, was ProZ.com. The portal is very good at getting its content indexed by Google; for years this was a real advantage to me, because it made my CV and my profile prominently visible in various relevant online searches and brought in a lot of interesting project queries. Then I started participating more in the forums several years ago as part of a research effort on common software user habits and problems, and things began to get out of hand. The first time I really became conscious of the amount of garbage tagged with my name which ProZ spread on the Internet was when an old friend tried to look me up on Google and found that my name autocompleted almost as soon as he started typing my surname. There were nearly 60,000 Google hits associated with my name! That seemed excessive, even for a compulsive blogger and commentator like me. Then I had a look at the individual entries and noticed that the same forum posts were being indexed separately for a zillion languages. Korean. Hungarian. Estonian. And so on. The information I wanted people to find about me was being buried in a huge pile of virtual trash. I felt I had to take action.

Although for years I had made it a point to use my real name on the public portals, because a serious business person does not hide behind aliases in my opinion, I promptly changed the name displayed for my ProZ profile from "Kevin Lossner" to "KSL Berlin". There were other reasons for doing this, but the main motivation was to take out the trash and give "real" information more visibility. My real name is still displayed on my profile and CV there, which are the main areas of interest for me. I would recommend a similar approach to all those who maintain profiles on that site and wants to avoid having their online information buried in irrelevancy. Now the 60,000 hits have dropped to under 9,000, most of which are old forum contributions where someone quoted me or referred to me by name. Although to judge by the recent unexplained imposition of vetting on my PrAdZ posts I'm persona non grata there, staff have not yet done me the favor of expunging my name from the electronic records as good Stalinists might do with history books.

After the "purge", my Google record is more or less as I would like it. Of the top the hits today, there are really only two that I don't feel belong there, from a "bingmusic" and a "pipl" site that seem to have lifted data without permission. Most of the hits in the first few pages point to reasonably current, relevant professional information.

If you haven't done a "health check" on the online results list for searches with your name, I encourage you to do so, and if you find a lot of unhelpful stuff in the most prominent hits, think about how you might change that.
Posted by Kevin Lossner at 7:15 PM