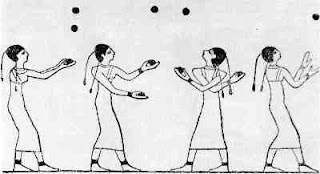 Juggling formats has probably been an issue for translators since ancient days when the various media of stone, clay and papyrus required different tools and sets of skills. And the Babel of formats has only gotten worse over the millenia as any practicing translator knows instinctively. It often seems that the portion of time spent on actual translation diminishes as customers submit documents with insane mark-up schemes that require graduate studies in formal logic to sort out. Some time ago, I published a little PDF guide on preparing MS Word and PDF files with content to exclude, i.e. cases like when a customer asks you to "translate only the green text, proofread the hot pink text, pray for the red text and ignore the rest". I thought I had pretty much covered all the cases when last night I received a help request from a charming colleague who had read the instructions but still couldn't sort out what to do with her particular project. It was actually a scenario I had described - copying text to translate from one column into another and hiding the original source column - but in her case, only the green text in the source column had to be copied over for translation with a translation environment tool. Minor variation on an old theme.

But there are sooooo many of these variations. I had one yesterday that had me baffled. Three simple Excel spreadsheets that refused to import into memoQ. I was really baffled by this one until Kilgray's support department offered the following explanation and workaround:

As far as I know this error message occurs when embedded tables are present in the Excel document. At the moment unfortunately memoQ cannot import the files you have sent us in this format. I can suggest two workarounds in this case:

- You can convert the embedded tables to ranges, please check out the following guide:

- You can save the XLS file as Excel 2003 XML format in Excel, then this XML file can be imported to memoQ with the Excel2003 filter. After you have exported this XML file you can save it as XLS in Excel.

These suggestions work, but by the time I got the timely response I had already gone another way copying table content into MS Word, the re-importing it to Excel via OpenOffice to avoid getting messed up by line breaks in the cells. All a bit complex and time consuming, all of it an unwanted distraction from what I would much rather do: concentrate on producing the best translated text I can.

I have about 38 years of IT experience of various kinds, though for much of that time computers played a supporting role for other interests. But still I'm reasonable good at sorting out data migration puzzles, format nightmares and the like give a little time to ponder matters (though, alas, in our profession, time is one element that is often missing). However, lately I am often hard put to find solutions for some of the crazy format challenges presented. And if I find things a bit nightmarish, what must others with less geeky histories be experiencing? Something is definitely wrong with this picture. More than webinars, training courses and dummy books is called for, but I can't say what. And the high priests of complexity, the witch doctors who make a good living as consultants from other people's confusion, see the problem as a opportunity... and perhaps that is part of the problem.
Posted by Kevin Lossner at 12:49 AM