memoQ projects now translatable and editable in an RTF editor!

It's been nearly four weeks since my last blog post here; since completing the requirements for my German hunting license at the end of March I have been very busy getting to know the 385 hectare area in which I'll be hunting (in part by doing a GPS survey of the area on foot and marking important places on maps using Google Earth and other orientation tools). Business and personal matters as well as preparations for the court battle in Zurich with the infamous non-payer of translation work Dominic de Neuville (formerly of the now insolvent Language Promotions GmbH, currently DBA "Transit") have been a real handful. And with all of that I had the preparations for the Spring Natural Abilities Test (Verbandsjugendprüfung) for two young hunting dogs, Ajax vom Bernsteinsee and Daniavizsla's Barack.

In the whole whirl of activity I had rather lost track of what was going on in Kilgray's world, though I knew I had to get my tail in gear and do some preparation for my talk on tool interoperability with memoQ at the upcoming memoQfest 2010 in Budapest. I remembered the promise of the company's director of development, Gábor Ugray, to complete a feature I've been pestering Kilgray about for nearly two years by the time of the conference, but I figured that it wouldn't happen since I hadn't heard about it for a while.

O ye of little faith. In my two years of contact with the company, Kilgray has seldom failed to meet a promised target, and when plans are changed, the users are informed well in advance and plausible, acceptable reasons for the changes are given along with the new plan. This is nearly unheard of in the translation industry. But once again, the boys in Budapest have been true to their word.

I returned from dog trials in Osnabrück near midnight yesterday, tired and sick from breathing the pollution produced by my chain-smoking friend on a 450 km return trip. (I thought about walking to spare my lungs, but the dogs wanted to get home faster.) This morning I downloaded my e-mail (a horror of hundreds of messages for a few days' absence) and discovered a fat gold nugget in all the electronic mud I had to pan: the public beta of memoQ version 4.2! It's available for download at http://kilgray.com/memoq/42/memoQSetup.4.2.5.exe. For a "minor" update, it has some pretty major features, one of them being the long-awaited exportable and importable RTF tables, similar to the "external views" or bilingual exports from Déja Vu.

This feature can be used in a number of ways that are important to translators, translation agencies and translation consumers. For many years I have used this feature in Déjà Vu to export commented segments to indicate terminology uncertainties, source text errors, points to consider and more. I also export entire translations for review, comment and correction by persons who do not use CAT/TEnT tools, i.e. a typical translator consumer in industry. The modified versions can be re-imported with a few menu selections and mouse clicks, saving me a massive amount of time updating projects and translation memories. This is the feature I have missed the most over the past year as a heavy user of Kilgray's memoQ environment, and I have been hoping that something similarly useful would be added to the toolkit there.

Although there are apparently a few quirks in the first beta version with this feature (such as an indication of more changes than I actually make to the RTF file), it seems to work quite well, and it exceeds my initial expectations for the export in most respects. The comments column was too narrow for my taste in the test export I made, but perhaps that's because there were no comments. I cheated and re-sized the columns the way I wanted them in the screenshot at the end of this post.

The new feature is accessed in the Translations view of the Project home tab in memoQ. The Export bilingual option offers the following possibilities: 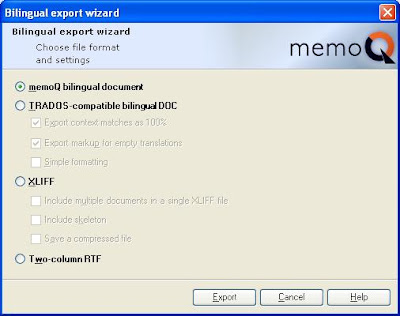 Selecting Two-column RTF causes the Next button to appear: 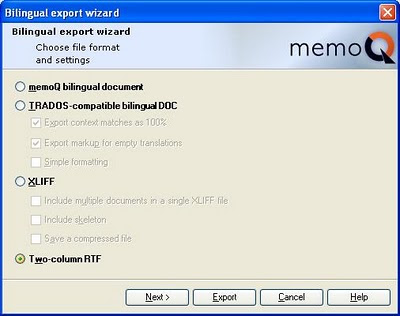 Clicking the Next button shows the following: 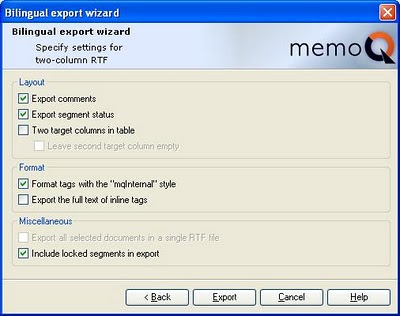 As far as I can tell at this point there isn't a "commented segments only" feature yet, but I'll do my best to get the development team drunk next week and talk them into it. But I'll bet they're already ahead of me on that one. The exported RTF file (with the cheat of resizing the empty comments column) looks like this: 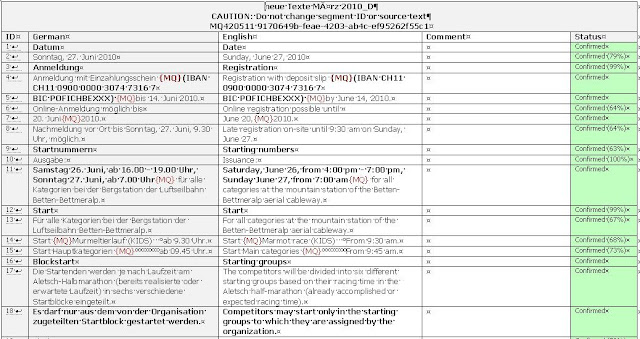 There seems to be a little code page issue with the German "ä" in the title, but hey, it's beta and that doesn't affect the functionality. This RTF file can be edited by someone in MS Word, WordPad, Open Office swriter or other tools and re-imported to the memoQ project. By "editing" I also mean translation. The target column can be exported empty and filled in by a translator using only word processing software. In this way, for example, memoQ can be used as a tool to facilitate the translation or editing/review of all the file formats it works with by persons who use only a word processor!

The re-import into memoQ worked well in my test. In one case I chopped out most of the RTF file and left only a few lines of interest - the ID column ensured that the modified segments were re-imported accurately to the right place, even when I changed the order of the lines and introduced gaps in the text sequence. 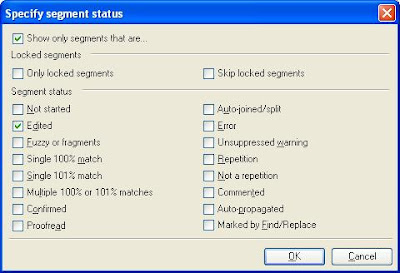 What I would like to see though is a mark-up view or some sort of change history like one has for the re-import in Déjà Vu. But this is still a great start and removes the last obstacle to full implementation of memoQ in all my translation processes.
Posted by Kevin Lossner at 11:09 PM