Quite some time ago, I summarized the techniques for translating TTX files with Atril's Déjà Vu X and published the information as a PDF file, which is available as a free download from one of my web sites (by clicking the link earlier in this sentence, for example). Now I would like to present how this task might be approached using Kilgray's MemoQ.

First of all, let's consider why you might want to do this at all. I think a typical situation might be where your customer insists on a TTX file as the deliverable translation. Another case might be where the files to be translated need to be pre-processed with TagEditor to reduce import time (like when MS Word files are heavily laden with graphics). I often use TagEditor to pre-process jobs I translate with Déjà Vu, and while MemoQ's import capabilities are generally better than those of DVX (and MemoQ sometimes handles files that TagEditor can't), sometimes everything just runs faster and better if I make a TTX to import into MemoQ.

You can argue about TMX compatibility with the customer all you like, but in many cases too much leverage is lost for future work if you deliver anything except a properly translated TTX file. So don't argue, just do it. In most cases you will want to pre-segment the file. The procedure for doing this is described in Steps 0 & 1 of the Trados TTX in DVX instructions previously mentioned. If you do not have access to a Trados license to use a TM provided and get the best leverage, you should ask your client or a colleague with a Trados license to assist you in the presegmentation (the latter only if the client's confidentiality rules permit).

When you are ready to import the TTX file into MemoQ, there are two options in the Project Wizard or in the Project Manager window: "Add document" and "Add document as...". The former is an import routine that simply brings in the segmented content. The second option opens the document import settings window (click for an enlarged view): 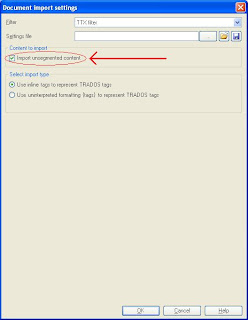 Selecting the option to import unsegmented content (circled in red with a red arrow pointing to it) will cause numbers and dates, which are usually skipped by Trados, to be imported into the MemoQ project. I don't know of any other software that will do this currently. This is very helpful for technical or financial documents with tables of numbers to be corrected. It is not easy to find all this content in the TagEditor environment, so in this regard, this aspect of quality assurance is a lot easier for a Trados project if it is done in MemoQ.

Quick minds may have realized at this point that with this second import option, all the content of an unsegmented TTX file can be imported. While this is indeed possible, it's usually not a great idea, and it may upset the customer in many cases. This is because the the TTX file cannot be "cleaned" to transfer the data into the Trados translation memory. However, a target file can be saved from it. If for some reason you translate a TTX without segmenting it, the TM information is transferable to the client as a bilingual file (Trados-compatible Word document) or a TMX export from the MemoQ TM, but this is a rotten idea for all but the simplest files, because the segment leverage of the content imported into the Trados TM will probably be awful. You are much better off getting someone to segment the original TTX for you and "retranslating" it from the TM in MemoQ. The only time I would translate an unsegmented TTX myself is if I am using that format for expedience in the case of a huge Word file full of graphics or something similar.

After the TTX has been imported into MemoQ, if you want to clear the target cells, then right-click anywhere in the translation work area and choose Clear Translations... from  the context menu. If you want to clear only a specific range, select the beginning of that range, then shift-click at the end of the range to select all the cells in between. In either case, there are a number of options for what should be cleared (all translations, just unconfirmed segments, etc.). The way this option is implemented is less dangerous than the analogous function in DVX, where I have to remember to filter what I want to keep before clearing target cells. Filter functions can, of course, be applied in MemoQ too.

When you are done translating the (segmented) TTX file in MemoQ, your output is a "uncleaned" TTX file that contains both the source content and your translation. If you have a copy of TagEditor and the original file available, you can save a copy of the translated file in its original format by using the command File > Save Target As... in TagEditor. If you don't have the original file, you can't save a target file - your customer will have to do that.

If your customer has a translation memory relevant to your project, it should be exported from Trados Workbench in TMX 1.4 format and imported into a MemoQ database for concordance use. Please note that it is better to use these databases for the pretranslation/presegmentation step than to presegment the Trados file against an empty database (basically copying the source content 1:1 to the target) and then translate in MemoQ using the migrated TM content from Trados; the leverage will generally be higher (i.e. more and better matches).

This procedure is safe and 100% compatible with Trados. It can also be performed with the unlicensed version of MemoQ (MemoQ4Free) with the restrictions that apply to that product (only one file, no import to the TM, just to the termbase).