The Invisible Hand of Social Media 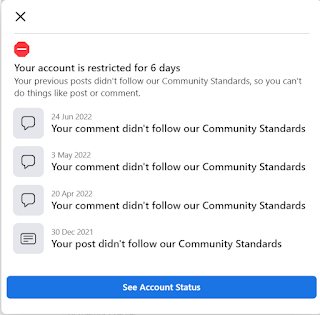 We've probably all been there by now. The evolution of social media platforms has seen the "rise of the machines", with artificial (non-)intelligence programmed by unintelligent humans monitoring and managing our actions, sometimes with little or no possibilities of pushback on our part or processes that waste inordinate amounts of time to obtain correction. We see this on Facebook, LinkedIn and other media which are too often also a major venue for business communication and technical support for professional tools we use. In the case involved with the screenshots above, my "wicked" comment was made with regard to an economic theory promulgated by the long-dead white Englishman, Adam Smith, and I was given the opportunity to protest to an external board after the fourth-world budget help confirmed that I was indeed a bad person promoting terrorism. I wrote:

There was a discussion about the abuses of capitalism and the flawed thinking of Adam Smith's "invisible hand", which he thought guided markets to do the right thing without control. As we all know, it is necessary for societies to exercise some control to protect health and safety, the environment etc. Blind belief in the invisible hand too often leads to tragedy -- in a sense, this invisible hand concept points the middle finger at us humans too often. So I suggested a metaphorical amputation of a metaphorical middle finger on a metaphorical invisible hand, meaning that we need legislation, etc. to protect against abuses in an unrestricted market. No real violence against any living beings whatsoever was suggested. The AI used by Facebook is functionally idiotic.
Consider also that if the hand is invisible the metaphorical blood must be too, so amputation should shock nobody, as any gore will also be invisible ;-)

Now all that is just a bit of amusement over coffee in the morning. But other cases are more serious, like the automated banning of a Ukrainian software developer for two months on LinkedIn because Putinist trolls objected to him trying to describe the reality of serving his customers while coffee breaks are accompanied by missile strikes and business-as-usual genocide. It seems that a certain volume of complaints can trigger a ban even when no specific violation can be identified. Artificial intelligence indeed.
Entirely too much trust is granted to automation, almost a reflex, even when it obviously contradicts logic and common sense. In the translation sector, I encounter time and again the idea that language services work should be cheaper if it involves text pre-proccessed by machine translation such as DeepL, even when it can be demonstrated that achieving the desired level of quality takes longer than if the text were translated by human effort only. So time isn't money for these people, I guess. The real issue is slavelancing.
Some postulate that most people need to believe in a Higher Power of some sort and take from it the direction and meaning of their lives. I used to dispute that, but seeing now how so many educated people in the business world have replaced Nin-girsu, Shiva, Allah, Nossa Senhora da Fatima and Mighty Cthulu with the new God of MTness, I suspect I may have been wrong.
As with most religions, it's our people and their welfare who are the true victims of this automation religion, while the priests argue that the real problem is that we haven't sacrificed enough to that invisible middle finger the technologists wave in our faces.
But I ask, what's the harm of paying a few more cents if you must if it leads at last to a lot more sense and better understanding for us all?
Posted by Kevin Lossner at 11:50 AM