While the idea of using sublanguage variants, such as UK, US or Canadian versions of English, sounds nice in principle, in practice these often create headaches for users of translation environments such as memoQ, particularly when exchanging glossaries with others but also when viewing and editing the data in the built-in editors. Many times I have heard colleagues and clients express a wish to "go back" and work only with generic variants of a language in order to simplify their management of terminology data. In the video below, I share one method to do so.

At 3:08 in the video, I share a little "aside" about how the exported term data can be edited to mark a term as forbidden (for instance, if its use is not desired by the translation buyer). Other changes to the information are also possible at this stage, such as the addition of context and use information for example. Other data fields from the term base can also be included in the export for cleanup if these play an important role in your memoQ term bases.

For years, users have requested an editing feature in memoQ that would make "unifying" language variants possible, but as you can see in this video tutorial, this possibility already exists and is neither difficult nor time-consuming to implement.

If you do not wish to create a new term base to import the cleaned-up data (as shown in the video) but would rather bring it in to the same term base, it is important to configure the settings for your import correctly so that the original data will be overwritten and you won't end up with messy duplication of information. This is achieved with the following setting marked in red: 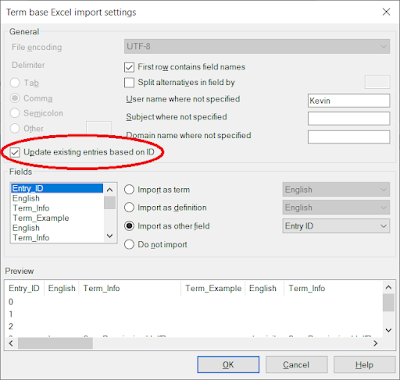 Why bother with the XSLX route then? Well, depending on what version of memoQ you use, you may not have that command available in the dialog. But more importantly, I find that when merging data from various language variants I often want to do additional editing of the term information, and that really isn't possible when merging language variants in the Properties dialog. Doing the edits in Microsoft Excel gives you an overview of the data and the option to make whatever adjustments may be needed. In Excel you can also make further changes, such as altering the match properties for better hit results or more accurate quality assurance.
Posted by Kevin Lossner at 4:50 PM