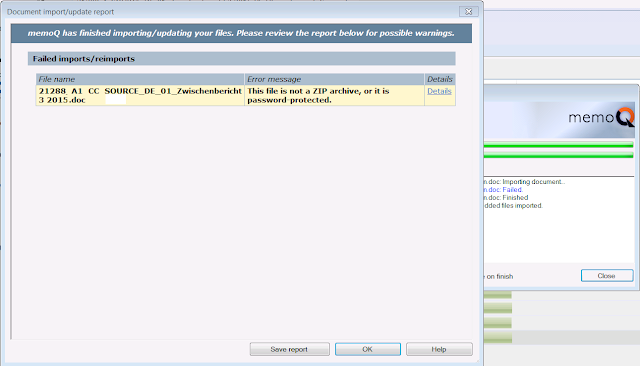 In between sneezes and hot shots of gingered lime tea I saw the Skype icon on my Windows task bar change to indicate a message. A distress call from a financial translator friend who had just received a new version of the Q3 report she was translating. memoQ has excellent version management features, which include a document-based pretranslation (X-Translate), which allows one to use a current or previous version of a translation to identify unchanged sections which have already been translated when the client sends a new version. This avoids potential confusion with undesired matches coming out of any ofd many translation memories or LiveDocs corpora which might be attached to a project.

This time, however, memoQ seemed to be getting weird on her, with error messages referring to ZIP archives and password protection. Her customer's file was not password protected, and as far as she knew, there was no ZIP archive anywhere in sight. She was dealing with "ordinary Word files". I have no idea what those are, but I hear about them often enough, and that is often where the trouble starts.

Last July I was teaching a week-long introductory course to memoQ in Lisbon, and when I wanted to show the course participants how this X-Translate feature worked, everyone ran into unexpected problems. When it was first introduced in memoQ, I noticed that the updates would work in any format. A translation which starts out as a script in a word processing file might later be updated as a set of presentation slides, and memoQ's document-based pretranslation did an excellent job of enabling me to focus quickly on the new material. It still does, but since the early days, some advocate of unintelligent programming decided that the filter used for the Reimport function to bring in the updated source text should assume that the source format was unchanged from the previous version rather than simply offer an appropriate filter for the current format. One must specify the filter to be used for an updated version if this assumption is not correct (as I also explained in my book New Beginnings with memoQ shortly after noticing this).

I can probably guess why this was done. With certain filters, the filter to use is not obvious from the extension (the multilingual delimited text filter, for example, if it is needed), or there may be a custom configuration of an "obvious" filter needed. In these cases, the assumption of using the last filter settings makes a lot of sense. However, if there is a change of format, where it is clear that the new filter should not apply, then some action should be taken other than a virtual assault on the user with mysterious error messages.

In the case of my financial translator friend, the update came as a DOC file, where the original had been DOCX. Geeks who have nothing better to learn with their time might know that DOCX files are actually renamed ZIP files, so at least the confusing error message above was "truthful" in a sense.

I see this sort of "switch hitting" with Microsoft Word file formats of various generations or changes from RTF to DOC or DOCX rather often. But in the case of importing new document versions, these changes mean trouble for memoQ if the user does not notice the difference, and given that the majority of working translators I have encountered who use Windows operating systems never fix the default system setting which hides the extensions of known file extensions, the chances that your average mortal wordworker will figure out this problem is just about zilch.

Armed with new insight into the problem, my friend was able to import the new document version successfully by specifying the appropriate filter manually and then use X-Translate to get her previous translation applied to sections of source text which had not changed (so that inappropriate 100% matches from a TM or LiveDocs corpus could be avoided). But for the future, I hope that Kilgray will apply a little more intelligent logic to the selection of filters for the document Reimport function of memoQ.
Posted by Kevin Lossner at 8:41 PM