"This comment thing is the last straw. I am definitely not upgrading to the new version of memoQ!"

The response from a friend who asked me to show how the comment function in memoQ had devolved in the latest version (memoQ 2013, aka version 6.5) revealed the frustration of a user whose main interest in new product features for much of the past year has been how to disable or avoid them. Unfortunately for her, there appears to be no escape from the latest innovation, which one member of the memoQ Yahoogroups list suggested would become known as Commentgate. This may be a good example of the old adage "if it ain't broke, don't fix it".

The old comment function has been at the heart of my use of memoQ for years, and the ability to export comments to share with my clients was one of the main reasons I pushed Kilgray to introduce the bilingual RTF table exports which are so popular for editing and translation. Comments added in a word processor (such as Microsoft Word) could be re-imported to the memoQ project and reviewed. It was all very quick and simple.

If the comments included questions about a text or a term, the response in the comment column of the RTF table would be included when the bilingual file was re-imported, which was often convenient for editing purposes. A record of questions and answers could be maintained fairly easily in the editable comment field.

All that has changed with memoQ 2013. Disastrously so in the initial release on May 31. In their eagerness to implement an LQA quality assurance model relevant to only a minority of users, mostly the sort of agencies who prefer metrics in place of actual quality, Kilgray dynamited the previous straightforward, robust comment function, adding dropdown selection fields for "severity level" and scope. 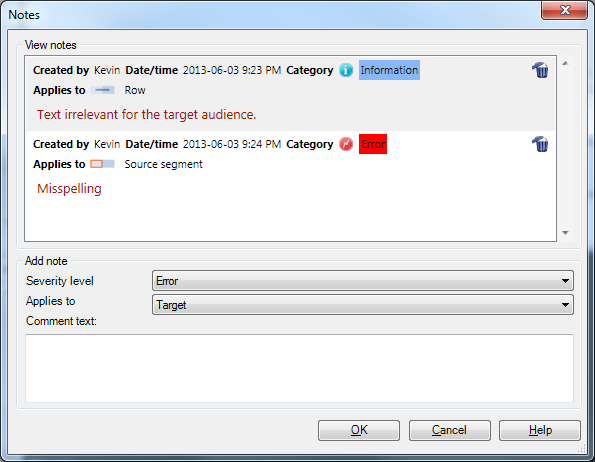 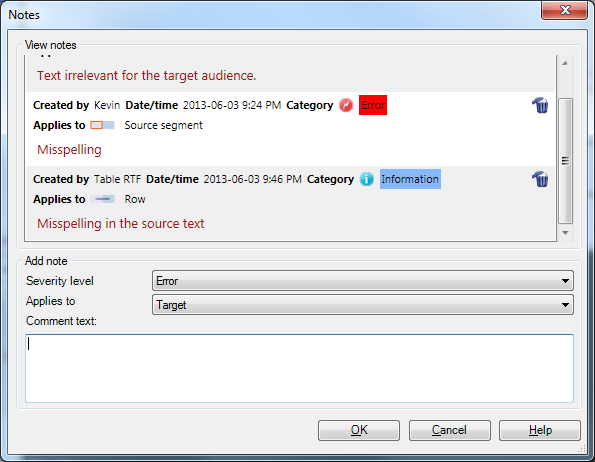 This is all really a shame. In the effort to push server-based workflows and cater to a limited special interest group, memoQ's architects have managed to sabotage one of the tools (or two, depending on how you count) which have contributed to their great success in recent years. And unfortunately, unlike other recent, often irritating "innovations", such as the various target autotext options that drive many users of dictation software batty, this new type of comment can't be switched off so that we can work in the old, accustomed way.

Many users have already objected strenuously to this broken functionality, and some compromise solutions have been suggested by Kilgray. One of these, which involves a delimited export of all the comments in the RTF bilingual export, would be reasonable. Whatever changes are made to commentary in memoQ 2013, I hope this will include making comments editable very soon with appropriate rights.

The two selection field in the new comments dialog have a default behavior that is probably useful in some cases. Once a comment has been created, the next comment made in the text will assume the same "severity" rating applies (not necessarily a valid assumption, but if I am going through a text marking things of the same type this can be useful). All comments are assumed to apply to the target text by default. This is a bit of a nuisance to me, as most of the comments I make in a file refer to errors or unclear expressions in the source text. But really, for the way I work, the two classification steps with the dropdown menus are just extra work and additional sources of possible errors and/or confusion, so I would be quite happy to bypass these altogether.

I do like the idea of a comment history for a text. This would be relevant and useful for the way I work. But overall, the current implementation of the comment function in memoQ 2013 does not serve my interests at all and creates unnecessary complications for me and many other users.

Posted by Kevin Lossner at 9:18 PM