It's been two years since I last reported on the rate survey which Germany's largest association of translators and interpreters (the BDÜ) conducts. Since 2008 the organization has contributed some of the most valuable hard data on what is really happening "out there" for average qualified professionals. Others, such as the ITI, seem to be moving in a similar direction and offer interesting variations on the collection and analysis of data, but the BDÜ have a solid five-year data history that is so consistent and plausible that it shows most clearly the likely self-interested deficiencies and distortions of less professional surveys and claims by the machine translation lobby and its paid agents such as TAUS and the Common Nonsensers.

The data clearly show that, while rates are not keeping up with what I feel real inflation is, they are not generally declining in absolute terms. On the whole, the qualified professionals reporting in Germany's survey seem to be doing well enough in these troubled economic times.

Unfortunately, the only record I have of the previous years is what I have published on this blog in past years. I gave my previous surveys away to various friends who were not in the BDÜ to show them the averages charged by large numbers of colleagues who actually make a living from translation.

This year, I received not only the usual rate survey - this one conducted in 2012, covering 2011 rates - but also received a small correction booklet in which the BDÜ republished some tables found to contain errors. So I will discuss a bit of these data. And because I am particularly concerned with my own main languages, German and English, my discussion will be skewed toward that. Sorry. But for a mere 15 euros you can order yourself the full story for all language combinations reported from the BDÜ publication department. This investment is worth it!

The BDÜ are a clever bunch, but not yet clever enough to realize that many people who don't read German will care about this publication or their many other excellent works. So the publications page (unlike the multilingual main page where the database of translators can be searched) is in German only. However if you click HERE, a copy of the Honorarspiegel (literally, the mirror of rates) will be put in your virtual shopping cart, and you can proceed to checkout (Zur Kasse gehen), running the gauntlet of more German pages and login requirements until you are ultimately rewarded with a purchase. I do hope my German friends find a way to make this easier for the rest of the world; I can only think of about half a dozen viable approaches. Nonetheless, somehow my very monolingual American mother manages to navigate the Teutonic thickets of Amazon.de to give gift certificates to me and her granddaughter in Germany, and if she figures all that crap out without a single error in a decade, I figure the occasional professional linguist can manage too. And I do find it odd that Amazon, for all their commercial savvy, don't seem to offer an easy way to give gift certificates to friends and family in other countries with a friendlier user language interface. So the BDÜ could theoretically easily blow away Amazon in that point of commercial savvy. The world is full of wonders.

So what are the hard data for my language pair and direction (German to English)? Here are the latest averages: 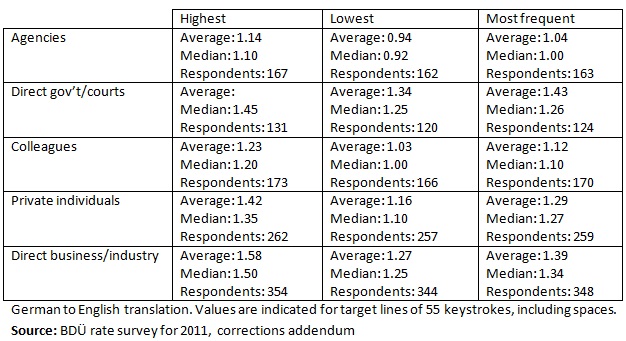 The rates cited are in euros. Alessandra Muzzi's Fee Wizard provides a convenient way of recalculating these target line rates into word or page rates that might be more understandable to you.

And, last but not least, here are a few data for other directions and combinations:

There are averages. If you are a top-quality translator in one of these pairs and charge on the average considerably less, perhaps a bit of reflection may be beneficial.

The full rate survey from the BDÜ contains a lot more data, including average interpreting rates, hourly charges and word rates accepted, so it really is worth spending a bit and seeing the whole picture.