The pain in my left arm started three days before departure on my first holiday in what I supposed to be a decade. By the night before, the arm had grown numb, the numbness spread to my neck. Accompanied as this was by sharp pain in my back, chest and stomach, at times I imagined I might be about to expire of heart failure or perhaps a sudden ruptured ulcer. But I resolved not to die on the soil of Germany, nor in its airspace, so I persevered and reached the Schönefeld airport despite dizziness and a recurrent feeling that I might, for the first time, collapse in a faint. So it is when one has forgotten what it is to take time off and the fear of the unknown strikes.

As I drove through Berlin to bring my dogs to the friends who would care for them for a week, my car stalled a few times. The drivers behind me honked and cursed predictably, displaying the lengths of their middle digits. I showed them that mine, too was intact and that my mouth was clear and free, able to accommodate it. They waved their fingers once again as if to remind me that these are the scepters with which their kingdoms are ruled.

Dogs now in safe hands, I left the Volvo on the Lichtenberg street and made my way to the Underground. Two hours of sleep the night before had left me slightly disoriented, time strobed and I was no longer certain how many stations had passed: one I thought, but perhaps it was four where it should have been three. I asked the fellow gripping the bar beside me; he considered briefly and with an enigmatic sneer informed me that I had gone one station too far, that I must get out now and go back one station. This was of course not true, but in the dark and cold of Berlin January, schadenfreude is taken where found, and so this interruption of my journey by a five minute wait for the next train to take me one station further ensured that I would see my connection depart as I hurried to the top of the platform stairs for the S-Bahn.

Twenty minutes later, the journey continued; another twenty-some minutes and I was at the station for the airport and made my way to Terminal B, stopping for breath and reminding myself that I must wait a few hours yet if this were to be my last day.

At the check-in desk an interrogation on the second, prohibited carry-on piece. Patiently I explained that medical devices are not subject to baggage rules. A medical certificate was demanded. For the first time in 17 years. Must be part of this new drive for innovation I thought, find new ways to disserve your customers. After patient argument failed, I sighed and put an edge on my accent, thought of my old archeology professor, an officer from Hamburg at Stalingrad, flogging his troop of Austrians and Bavarians through a snowy trench, and performed a theatrical re-enactment. Once the proper hierarchy was established at the check-in desk, I repeated the performance at the security station, and once again at the final boarding checkpoint, where once again an explanation was demanded as to why I had made it past previous checks with a forbidden bag. Rufen Sie bitte Ihren Vorgesetzten. Magic words, an incantation and pass phrase for the Portuguese paradise awaiting.

A bus ride, boarding. After a brief wait, the jet rolled, picked up speed and lifted above the malaise. The feeling flowed back into my arm, my neck cracked, and in my shoulder, which had been a solid plate of embedded pain, I could discern instead a knotted rope, which twist by twist grew smaller, to a thread and was gone. Breath came easy now, and I looked out over the wing, clouds below kindly hiding what I did not want to see. Above – blue sky. Good fucking riddance I thought. For a week. 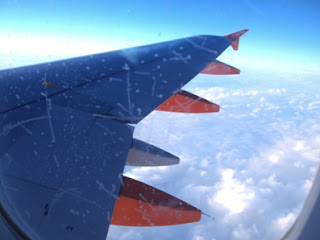 Two hours later, a clearing in the clouds, mountains below capped with snow. Briefly, I wondered what country that might be. France perhaps? Or Spain? I muttered a benediction and closed my eyes to meditate, perhaps catch a few minutes' illicit sleep before the welcome Unknown, then opened them again and reached for my Kindle.

The Revelation of the Grail: I read and wept as Baudolino presented it to his adoptive father, the emperor, now charged with the holy mission of restoring it to the hand of Presbyter John. Silently, I prepared myself to travel with him... and continued.

And then the journey’s end. I saw below me a green and pleasant land, with scattered clusters of construction. And then the land’s edge gave way to sea. We banked, the hint of sunset below the wing’s tip in the final approach to Lisbon. 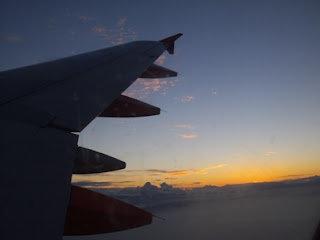 Posted by Kevin Lossner at 5:31 AM