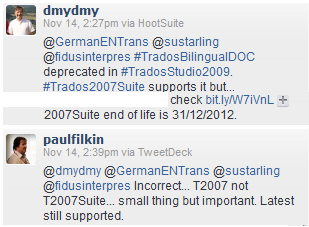 A recent Twitter exchange reinforced the impression of confusion I had regarding SDL's intentions with the older Trados technology. Many translators, corporate users and language service brokers continue to use the 1990s technology of Trados 2007 (which is the current translation technology of many EU institutions until it is finally phased out starting in the coming year), and recent troubles with the loss of "bilingual DOC" exports in memoQ 6.0.64 brought the matter of the old technology to a very uncomfortable head. (Earlier builds of memoQ must be used, or one must be patient until after the version 6.2 release, when this feature will be re-developed.)

The exchange with the colleague on Twitter as well as the frequent contradictions in ongoing discussions among my friends and clients in the translation world made it clear that definitive answers were needed to abate unnecessary fears and allow people to plan the future of their processes with proper information. So I talked to Paul Filkin, Client Communities Director at SDL,whose Multifarious blog is my favorite resource for reliable information about the technical arcana of Trados.

[KSL]: Judging from a recent Twitter traffic, there seems to be some confusion regarding SDL’s plans to discontinue support for SDL Trados 2007. So tell me – are Trados Workbench and TagEditor going away for good at last?

[PF] It’s worth clarifying that we are talking about SDL Trados 2007 and not SDL Trados 2007 Suite.  The difference is that the Suite contains the latest version of SDL Trados 2007 (as well as various other applications) which is 8.3.0.363.  But to answer your question specifically… no, Trados Workbench and TagEditor are not going away for good just yet.  I imagine there will still be users working with the older version of these tools for some time yet, but over time they will of course become obsolete – we just need to allow for that time.  The driving forces for anyone hanging onto these old versions will be development of hardware and new operating systems as well as upgrades to authoring systems that the retired versions will no longer be able to support.

[KSL]: What exactly ARE the difference between those two versions?

[PF] The best place to look for all the technical differences is the SDL knowledgebase where you can find a nice article called “What is new in SDL Trados 2007 Suite”:

[PF] The safest approach, because of differences between the old Trados versions is to ask your client to provide you with a fully segmented bilingual file, whether they are after TTX or Bilingual Doc.  SDL Trados Studio 2011 supports TTX and Bilingual Doc as a file type without the need for SDL Trados 2007 at all.  Your client should be able to provide these files for you because they have the appropriate software already.

The other alternative, if you don't have a copy of SDL Trados 2007 Suite which you can still purchase with SDL Trados Studio 2011 today, is to use a free application from the SDL OpenExchange called the SDLXLIFF to Legacy Converter.  This application can convert your Studio bilingual file to a Bilingual Doc or a TTX.  This process caters for two parts in this workflow.  First your client can edit these files in SDL Trados 2007 Suite and clean them into their Translation Memory, and second you can use the application to import the changes back into your SDLXLIFF so that you have the updated and approved version in your own Translation Memory.  You can get this application here:

[KSL]: What are the “dangers” in this approach? Where might it go wrong for my client?

This also means that the SDLXLIFF has been segmented using the new file types in Studio and not with the old file types in Trados 2007 Suite or earlier so even though your client will be able to clean the file into their Translation Memory they may lose some ability to fully pretranslate the same source file using Trados 2007 Suite or earlier.  This is actually the same problem that could occur when converting the file using memoQ or WordFast for example but as those clients only provide the translator with the source file and not a pretranslated bilingual file in the first place this doesn't seem to be an issue for them.

So all in all both approaches seem to work… the important thing is to understand what your client wants to do with the file when they get it.

[KSL]: Can these formats be edited and “cleaned” by the client to create a properly formatted target (translated) file?

[PF] Only if they were prepared using SDL Trados 2007 in the first place.  There is no substitute for SDL Trados 2007 if the client wants a properly formatted target file and future leverage from their Translation Memory.

[KSL]: At what point can we expect support for TWB and TagEditor formats to be discontinued?

[PF] I think it’s likely that when we release the next version of the software SDL Trados 2007 Suite and SDL Trados Studio 2009 will be retired.  However, the important thing to note is that we have the Trados 2007 infrastructure built into Studio and this allows users to upgrade Translation Memories, handle legacy bilingual files and more importantly use the SDL OpenExchange to develop applications that will support workflows using the older tools.  We are already seeing developers looking at ways of improving their older solutions with Studio since we were awarded the EU contract last month.

[KSL]: Does SDL Trados Studio 2011 still include a version of TWB and TagEditor?

[PF] It’s not included automatically but you can still purchase it when you buy SDL Trados 2011.  It’s not sold as a separate piece of software anymore.

[PF] The honest answer is we haven’t made a decision on this yet.  SDL Trados 2007 Suite is really only needed by people who have create, rather than use, these legacy files.  So in reality these people probably already have it… all they have to do is make sure they always prepare files for those who are translating them.  This may be better for them and for the translator.

Posted by Kevin Lossner at 6:12 PM