At the end of last week, Kilgray released Build 53 of memoQ version 5 with a number of interesting new features. One of these is "pseudotranslation".

I grew rather fond of this feature in the localization tool Passolo years ago, when I used it to identify software strings that developers had hard-coded instead of organizing in translatable resources as they were obliged to do. In fact, this is the application Kilgray mentions on the corresponding Help page. I also see it as a useful support for "round trip testing" of translation workflows.

Too often, translators and project managers experience difficulties exporting translated content to some original file formats. This was often a problem with Trados TTX files created and translated with different builds or versions of Trados, for example. So to avoid nasty surprises shortly before delivery after a long project, it is always a good idea to make sure that "what comes in" (such as an InDesign format of some kind) will go "out" again cleanly. Usually this is done by copying the source text to the target text and changing a few words or lines. This preserves complex tag structures, which may affect the stability of a target file, for example.

Pseudotranslation is an improvement over source to target copying, because, among other reasons, it makes the test file more clearly identifiable as such. And in cases such as the software translation scenarios, it offers additional insights into potential problems.

To use the pseudotranslation feature in Build 53 of memoQ 5 or later, do the following: 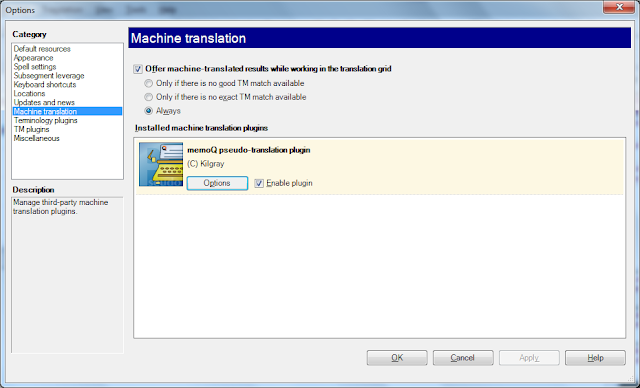 2. Click the Options button and configure the settings as appropriate: 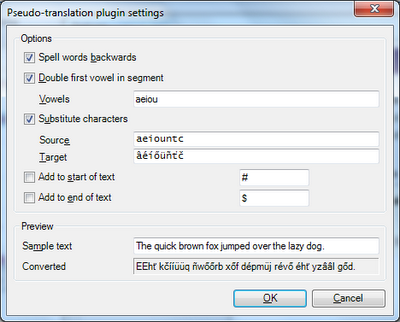 3. Choose Operations > Pretranslate... and make sure that the checkbox labeled "Use machine translation" is marked. 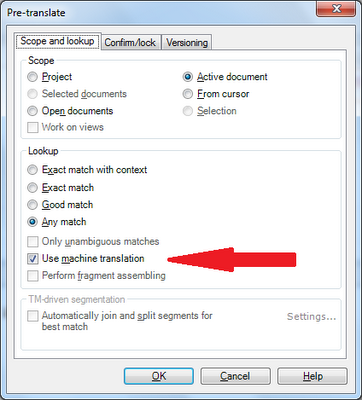 The result will be gobbledygook which preserves relevant tag structures: