"Amnesty" by any other name

Oh Lord, won't you buy me that memoQ Pro?
My friends all own Trados: that's no way to go.... 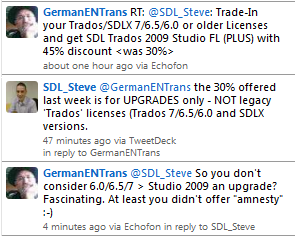 A little more than a week ago, I reported from the trenches of the price war between SDL and Kilgray. Back then one could get Trados license discounts of 50% or 40% or 20% or 30%, depending on various conditions and the color of the chicken you sacrifice to the voodoo gods in Maidenhead, UK. I sacrificed one of my carrier pigeons (well, used the body at least after a rival pecked him to death) and got my upgrade from SDL Trados Suite 2007 Freelance Whatever at a 30% discount. Realizing that ending all discount offer percentages with a "zero" might be misinterpreted by those unkindly disposed toward SDL and obsessed with numerology, the company has now made a new offer with a friendly "5" in the percentage. This 45% discount applies to current users of noncurrent Trados versions 6.0, 6.5 and 7.0. Now assuming that this is 45% off the list price of a new Trados license, this means that SDL customers in need of amnesty are getting a 5% better deal than last week's 40% discount to strangers or a 5% worse deal than to those same strangers participating in the ProZ group buy. Or maybe the deal is slightly better - for owners of a v7 license at least - if the baseline for calculation is some lesser upgrade price.

But as @SDL_Steve on Twitter pointed out, it's not an upgrade if you have Version 7 or earlier of Trados and move to Studio 2009. Some Trados traditionalists I know would agree with that statement.

Oops... I used the "A" word that SDL has so wisely eliminated from their marketing vocabulary (I hope) after two prior "amnesty" offers to users who had committed the crime of not upgrading before resulted in a windfall of new license purchases for SDL's competitors. One friend told me that if SDL had not told her she needed "amnesty" for her Trados 2007 license she never would have discovered memoQ. She speaks of SDL with gratitude for this.

So is this latest offer really a good deal? Hard to tell, really, but in this case it doesn't look much better than other offers for those with no old Trados license and in some cases a bit worse. And if I've got it wrong, please forgive me. I think too many discounts in too short a time period does not promote sales after a while; it just sows confusion. This does not promote an image that is beneficial to a mature technology company that does indeed have some good things to offer.

But I think this confusion is symptomatic for a large company that could be said to have lost its way in some senses if one could in fact remember what that way once was. Maybe the merger of cultures when SDL bought Trados is part of the problem. A few too many pints of cider and some yob starts messing around with precision German technology and drives it into a marketing ditch. Who knows? Or worse yet starts to confuse the user base by attempting to reform the software interface and impose the sort of user friendly grid paradigm that SDLX, DV(X), memoQ and others had offered for years.

Actually, the users aren't the only ones who are confused. When I installed my SDL Trados Studio 2009 upgrade last week, I was deeply concerned by all the ancient resources I saw being loaded into my finicky Windows system. If the developers haven't been granted amnesty, they might be shot for dumping vintage Win XP resources and drivers in a Windows 7 Ultimate system. I'll keep the drilling ready for when I finally get the guts to launch the software and see what it does to my system. So far I have been too busy... and too chicken.

In any case, Trados Studio 2009 is on sale now and probably in the future, with Studio 2011 on the horizon, presumed to be scheduled for release before 2011 is over. SDL, here's an idea: just call it Studio 2012 and if you make it this year, it'll look like you released it early and you'll be heroes. Or just call it the 2020 version... I remember a superheroic game with that title from Friday night roleplays at CalTech, and perhaps the company can have some fun and carry that theme a bit. And what company besides SDL would be capable of releasing software NINE YEARS EARLY? Talk about demonstrating market leadership and innovation!
Posted by Kevin Lossner at 4:32 PM